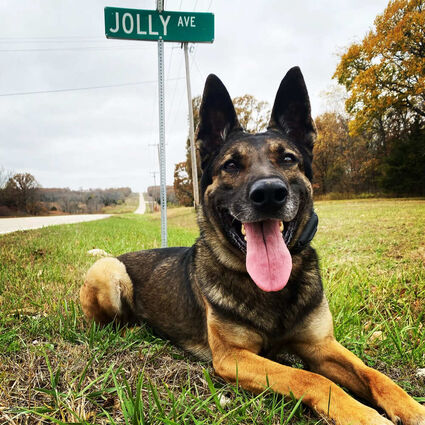 FORT CARSON - Military working dogs have been by Soldiers' side since 1942. March 13 is Military Working Dog Veterans Day – a day where we honor these four-legged companions who sacrifice their comfortable domesticated lives to serve under the red, white and blue and defend our freedom.

Jolly is a perky, wide-eyed German shepherd who investigates every new person and item he encounters. He sports an Army commendation medal on his collar for his many achievements. When first meeting Jolly, it is not difficult to understand how he acquired his name with his cheerful personality, explained Harrison.

Although it may seem as if they have always been battle buddies, it has not always been that way. When the two first met, they did not exactly click, Harrison said.

"He was kind of a jerk," added Harrison. "He tried biting people he didn't like."

Nonetheless, after some time and extensive training, the two learned how to trust one another. That trust was important because subsequently, it was put to the test when the two deployed to Iraq in support of Operation Inherent Resolve in November 2018, said Harrison.

Harrison said that the two had a very solid relationship at this point, and it only got stronger as their time in the Middle East carried on. Shortly after returning home from deployment, their union had become apparent when he could not sleep at night because he did not have Jolly by his side.

"You really do make a connection with these dogs," Harrison said.

Harrison and Jolly were selected for the PEDD-E course at Fort Gordon, Georgia, when they returned from deployment. This course specialized in off-leash operations, and they were the only handler and K9 team certified in PEDD-E at Fort Gordon. 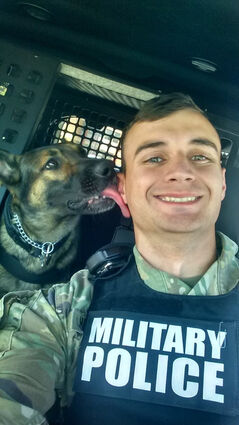 Unfortunately, the celebrations were short-lived. Harrison soon found an abnormal lump on Jolly's neck and immediately brought it to the attention of a veterinarian. The test results confirmed the lump as thyroid cancer.

"It was a pretty big hit when I heard he had cancer," Harrison said.

Although the majority of the mass was extracted, cancer had spread to other parts of Jolly's body, and Jolly was only given two and a half years to live. Because of this news, Jolly had to retire. No longer a service dog, Harrison decided to adopt Jolly.

As Jolly said goodbye to the Army, he was awarded an Army commendation medal for his many achievements. Some of these included completing 1,180 hours of explosive detection and conducting direct protection for former President Donald Trump during his visit to Iraq on Dec. 26, 2018.

Nowadays, Harrison said he goes home after work to his best friend, Jolly, who now enjoys a comfortable couch and bed. The two enjoy hiking and playing tug-of-war with many of Jolly's toys. At this point, Jolly has a life expectancy of one and a half years, and Harrison said he plans on spending every second he can with his best friend.