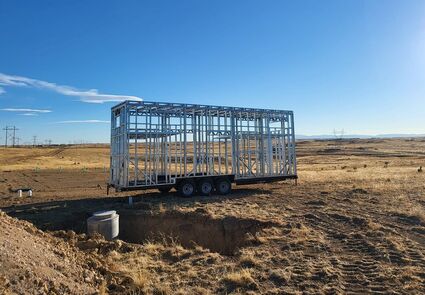 This tiny home under construction south of Fountain was stolen from property on Boca Raton Heights.

Some people suffer the loss of a stolen tool box, wallet, or maybe even a vehicle. One local man just had his entire house stolen.

Brandon Kite was in the process of moving to the rural neighborhood south of Fountain. He bought some land and started building a tiny house on it.

However, that house was stolen last Friday, March 4.

Now, Kite is asking the public to be on the lookout for his structure. He has reported it to authorities, but so far, no response.

The structure, still in progress, was on Boca Raton Heights – south of Pikes Peak International Raceway.

"I bought the trailer and tiny house frame in 2019 and started building it in Pueblo," Kite explained. "I own the minigolf course on Pueblo Boulevard. I wanted to live in it there, but Pueblo codes forced me out."

So, in 2020 he bought land on Boca Raton, 2 miles west of the Midway landfill. Last January he finished getting the septic installed and had the trailer towed to the land. He noted it requires special permits to move.

Kite hopes someone out there knows something so he can continue finishing his home.

"My plan is to finish building it there and live out on my land," he said.

Please call police with any information.