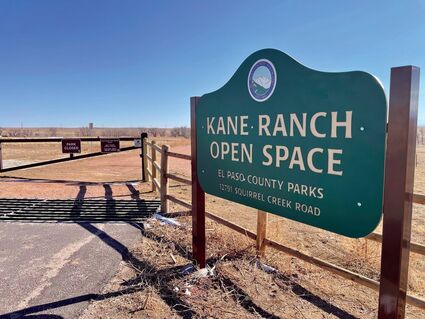 The entrance to Kane Ranch Open Space is 2 miles east of the Fountain Landfill along Jimmy Camp Road.

El Paso County will open Kane Ranch Open Space, the newest addition to the El Paso County Parks system, on Wednesday, March 23. It will feature trails accessible to pedestrians and equestrians, and plenty of scenery.

The property was once part of a 5,000-acre ranch established in the 1940s in part by a woman named Wanden Matthews La Farge, later known as Wanden Kane. She would became mayor of Fountain for two terms – and the first female mayor in Colorado.

According to the Fountain Valley Historical Society, Wanden Kane was born in New York City and came to Fountain in 1940; here she married Alexander Kane (1918-2003). She passed away in February 1991.

According to Fountain historians, Mr. Kane was born on the family homestead east of Fountain on Squirrel Creek Road. His father James obtained the land in T15S R64W section 30 in 1920. Alex became a business partner to Wanden Matthews La Farge in the purchase of the South Gore Ranch and they later married and built the Kane Ranch headquarters near Williams Creek. Alex Kane ranched and produced fine quarter horses for more than 30 years. The Kanes donated land for a county park and funded scholarships to local colleges.

The Kane Ranch Open Space Master Plan, completed in August 2018, guided the overall development of the site. The county used a multi-pronged public involvement process that included stakeholder interviews, a public open house, and a public hike through the Open Space to obtain citizen input on various aspects of the master plan. Construction of Phase I Improvements commenced in 2020 and was completed in early 2022.

Kane Ranch Open Space was scheduled to open last August. However, according to the Colorado Springs-based Trails and Open Space Coalition (TOSC), during construction it became clear to El Paso County park staff that the ranch's remote location could lead to damage to the resource unless the property was secured. Officials installed a security gate similar to the gate at the Pineries open space in Black Forest.

The Open Space is located at 12791 Squirrel Creek Road (4.1 miles east of the intersection of Link and Squirrel Creek Roads, and 2 miles past the Fountain landfill) and includes 495 acres of scenic open space, trailhead parking area including spaces for equestrian vehicles, portable restroom, and the 3.5-mile out-and-back Lariat Loop doubletrack trail. The site will be open from 5 a.m. till 9 p.m., April through October, and 6 a.m. till 6 p.m. November through March.

TOSC noted that the Lariat Loop trail "will be the primary natural surface trail of approximately 3.5 miles in length, suitable for hiking, running, bicycling, and especially equestrian use as the width will accommodate two people on horseback riding side by side."