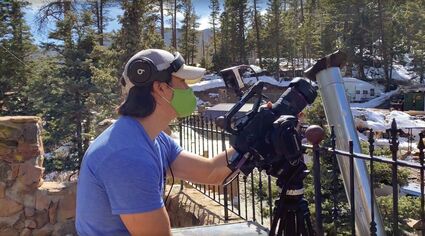 Tristan Hunter Owen of Fountain has been nominated for the prestigious Television Academy Foundation's 41st College Television Awards. The awards recognize and reward excellence in student-produced programs from colleges and universities nationwide. Winners in the competition will be announced by television stars at the awards ceremony on March 26.

Owen is nominated, along with classmate Thomas McDonald, in the Nonfiction or Reality Series category for producing, writing and directing "The Castle Builder," a documentary about Jim Bishop and the Bishop Castle he built in Rye, Colorado.

A 2019 graduate of Fountain-Fort Carson High School, Owen is currently a student at Florida State University's College of Motion Picture Arts. He is the son of Dr. Keith and Georgina Owen.

"The Castle Builder" tells the story of 77-year-old Jim Bishop who has dedicated his entire life to building the world's largest one-man project, a 160-foot-tall stone castle, hidden in the Wet Mountains of Rye, Colorado. Through the years he continued to be the sole builder of his dream castle even while battling cancer, Parkinson's disease and spinal stenosis.

"I used to spend the summers at my grandparents' cabin, which is located a few blocks down the street from the castle," Owen said. "Each summer my brothers and I would climb around the castle and observe the progress. As a child, and now as an adult, Jim Bishop's grit inspires me to build my own castle in this life, whatever that may be. I wanted to help share this story with others as they, too, can find inspiration in the remarkable journey of Jim Bishop."

Owen is an aspiring cinematographer who says he will do anything to bring the shots inside his head to life. One summer night he spontaneously decided to hike 8 miles-for four hours through the night-to summit, a mountain above 14,000 feet. The goal, to conduct a light study of the Colorado sunrise that towered over the mountainous valley he grew up in as a kid.

"I am currently in pre-production for a documentary feature that follows rural search and rescue volunteers as they fight to keep their program functioning while maintaining their duty to save lives in the depths of the Colorado backcountry," Owen said. "I eventually want to work with National Geographic to continue telling captivating stories from the mountains. The rugged environment that comes with living in the mountains attracts and creates individuals who have genuine stories that are rarely shared."

The virtual College Television Awards show will feature celebrity presenters including Dove Cameron (Schmigadoon!), Rick Glassman (As We See It), Harvey Guillén (What We Do in the Shadows), Sam Heughan (Outlander), Jordan L. Jones (Bel-Air), Rose McIver (Ghosts), Sue Ann Pien (As We See It), Danielle Pinnock (Ghosts), Logan Shroyer and Hannah Zeile (This Is Us).

The 41st College Television Awards will be streamed globally at TelevisionAcademy.com/CTA on Saturday, March 26, at 7 p.m. MDT.

A total of 54 students have been nominated in six categories for the 2022 awards selected from 185 entries submitted from 58 colleges nationwide.

About the Television Academy Foundation

Established in 1959 as the charitable arm of the Television Academy, the Television Academy Foundation is dedicated to preserving the legacy of television while educating and inspiring those who will shape its future. Through renowned educational and outreach programs, such as The Interviews: An Oral History of Television Project, College Television Awards and Summit, Programs and the Faculty Conference, the Foundation seeks to widen the circle of voices our industry represents and to create more opportunity for television to reflect all of society. For more information on the Foundation, please visit TelevisionAcademy.com/Foundation.