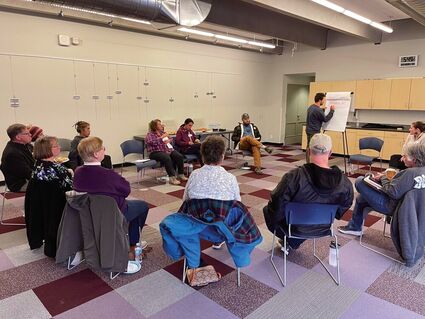 On Monday, March 21, the ad hoc committee rooting for a grocery store in downtown Fountain met to further organize and make plans for the future. Thirteen people participated in the hour-long meeting, including Colorado Trust Community Organizer Max Kronstadt.

This followed the March 14 Fountain Economic Development Commission meeting attended by a group of about 30-35 Fountain residents who want a new grocery store built in the old downtown area at West Missouri and South Santa Fe avenues – reported in last week's newspaper.

Residents Brittany Fechko and Susan Kircher helped lead the follow-up meeting. Current Fountain City Councilman Gordon Rick, and former Fountain City Councilwoman Terrie Burke lent their expertise concerning how to motivate the current council to do more to get a small grocery store to move into the now-vacant lot near the Post Office.

The group discussed giving itself a formal name to raise its identity in the community and ended up splitting into four groups, each with a specific goal in their campaign: increasing public awareness; continue looking for alternate sites; gathering data to support their case; and continuing the discussion with elected Fountain officials.

The city has been searching for what it calls "a mid-tier" grocery store to fill in that space, but so far has not been able to formalize any contract. City Economic Development Director Kimberly Bailey said there was an agreement reached in 2018-19 with the Pueblo-based LaGree's Grocery store chain to build on that site, but that the agreement was dropped because LaGree's got so much negative social media attention.

Fountain Valley News contacted Mr. Orin LaGree for comments concerning his company's withdrawal from the agreement, and this is what he had to say: "Time and money were invested and to my knowledge the community was excited. We did work with Kimberly on the project but an agreement was not reached. If there was an overwhelming negative reception on social media, this is the first I'm hearing of it. The only negativity I am aware of came from within the city government."

This reporter contacted the USDA, the agency that designates areas of the United States with food availability issues. A spokeswoman said term "food desert" was retired in 2013; it now uses "low-income and low-access census tracts".

No matter what name you apply to the area, there is no grocery store downtown, and it appears there are no serious prospects to build there, according to Bailey.

"I saw the infrastructure concerns that downtown can't handle a grocery store," Fechko said. "We are going to see even more traffic with additional homes being built and the fixing of Fort Carson Gate 19 by the end of this year. There will be more traffic along that road that could stop at a store in downtown Fountain, revitalizing the area, make it more walkable for residents, more accessible for everybody. Fountain has been defined as a food desert due to lack of fresh food. Studies have shown that when a grocery store isn't present, life expectancies are actually lower. So this isn't just an issue of convenience of us 30,000 people using one grocery store, it's also a public health problem. We believe this should be a top priority for the city to get a mid-sized grocery for the residents of downtown and beyond."

"We definitely need something for our community," said Burke, who served on Fountain City Council for nine years. She also said it would be nice to be able to walk to a grocery store downtown.

One member of the audience who identified himself as the father of a special needs child said the Safeway parking lot on Mesa Ridge is "a safety hazard for kids that don't listen but can't really listen or process things as fast as they're told. I don't mind driving a little bit, I understand people that want to walk. I would like to be able to walk to a small-town grocery store and feel like small town, not like the hustle-and-bustle of Colorado Springs."

Another audience member who identified himself as an infrastructure engineer with the Department of Defense, said "we're talking about the three different types of Fountain-Mesa Ridge Parkway, Hwy. 85-87, and Olde Town. It has so much potential here. I know we have limited resources. A grocery store would be far more important than all of the other economic developments going on. It's a far greater priority than expanding the city. We've got to work with what we have before we look to the future."

"We do talk about a grocery store, probably once a quarter," said another EDC board member. "It is on top-of-mind. Kimberly and the staff here have been looking, working with anybody who shows any interest. We want it just as bad as the rest of you. I live up on the Mesa and I hate going to Safeway. I don't want to go down to Wal-Mart. I want to come off the interstate, grab my groceries and come home. No one is showing interest in Fountain ... because we have two Wal-Marts, we have a Sam's Club, and we have a Safeway in the city. We welcome any of those conversations with any grocer."

Someone else added, "We also have the commissary at Fort Carson."

Bailey asserted that the city continues to work on this effort, saying "This is not a dying-on-the-shelf plan." 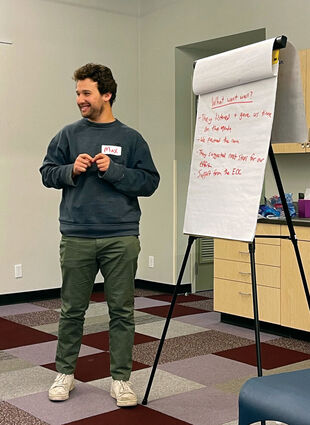 Max Kronstadt of The Colorado Trust discusses next steps in the effort to bring a grocery store to downtown Fountain.

The city "put over $240,000 in in-kind resources to solidify that grocer (LaGree's)," Bailey said. "We also did in 2019 a design aesthetics program that gave bonuses for a grocer using the character traits for the architecture of the building, they would get bonuses for their performance. The cost to build a 16,000-sq. ft., mid-tier grocer with adequate parking is $2.3 million. That's your price point you're trying to alleviate for that business. The challenge is that you have trade demographics and retail industry that dictates where and how they will land in a community. So the grocer search we did in 2018-19 was very targeted. It is a mid-tier, by-pocket specialty type of grocer. It is not your brand you see up on a ridgeline or up on South Academy. But you need capital to make this happen, and that's where it's really the rubber-meets-the-road. We're really not having anybody bring capital to the table."