Mayhem at the local playground 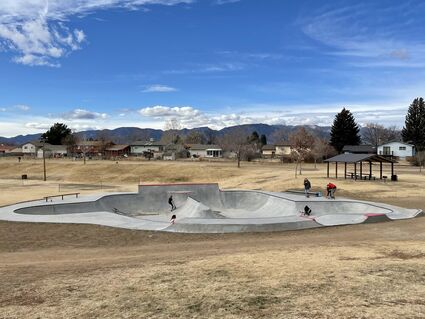 Area youth enjoy the new skate bowl at Fountain Mesa Park recently. On some occasions, teenagers take over and act aggressively toward young children and adults.

Mayhem at the local playground

Area parents are outraged as they say children are unable to play at Fountain Mesa Park without teenagers hassling them - sometimes physically assaulting young kids.

Residents have reported punches thrown, alcohol use, threats with pellet guns, vile language and a general threatening attitude by the teens.

"Yesterday a little frightened girl came up to some kids that were about to go into the Fountain Mesa Park and she said, "I wouldn't go in if I were you! Girls are getting beat up and one of them got a bloody nose! The older kids are beating everyone up,'" said nearby resident Camille P., who didn't want her full name used. "This group has been hanging out there, and basically claiming the skatepark area as their own. Anyone that comes near is cussed out to leave."

A group of dads tried to address the situation but got no results.

"The group of teenage boys was there drinking liquor and cussed out those dads," Camille said. "... They were so disrespectful to the dads, just zero concern like they were invincible."

Fountain Parks and Rec reportedly is trying to obtain funding for security cameras to better monitor the park, located on Fortman Avenue behind Janitell Junior High. And Fountain Police Department (FPD) says it's beefing up its presence.

"Officers are conducting more patrol checks at the park," Public Safety Information Officer Lisa Schneider said. "We have just recently been notified of the issues at the park. We want to make sure the citizens know to always call law enforcement during situations like this and not try to take matters into their own hands."

This newspaper published an editorial on this very problem at Fountain Mesa Park in the Sept. 8, 2021, issue. (https://www.epcan.com/story/2021/09/08/opinion/when-a-trip-to-the-playground-is-no-walk-in-the-park/10666.html) Parents had been discussing their concerns for some time at that point already. However, the addition of a skate park in this location recently may be drawing more teenagers than before.

Meanwhile, several residents say they plan to attend the next Fountain Park and Recreation Advisory Board meeting on April 5 at 6 p.m. to speak on the issue. They also hope to make parents of the troublemakers aware of just how much of a problem this is causing.

"Hearing from other parents that have had to stop going to that park because of these horribly behaved teens should be a wake-up call that something needs to change," Camille said.

Shortly after this newspaper spoke with FPD, the department posted this statement to its Facebook page:

"Over the past week, we have received a couple reports regarding aggressive activity of juveniles at Fountain Mesa Park. FPD is aware of these activities and we would like to advise our citizens that we take the quality of life issues at our parks very seriously.

To ensure the safety of our citizens who frequent the Fountain Mesa Park and other city parks, the Fountain Police Department will increase patrols and maintain a visible presence.

The citizens who utilize Fountain Mesa Park should be extra vigilant. Please report any suspicious or criminal activity to the Fountain Police Department at 719-390-5555 or if it’s an emergency please call 9-1-1."

In a related matter, residents around Fountain, Security and Widefield are reporting a new problem: teens shooting each other or passersby with Orbeez.

Orbeez are small beads that expand when soaked in water. They are intended as a toy. But now, youths nationwide are using them in what authorities are calling the "Orbeez Challenge," shooting them at people and causing injuries. Although they seem harmless, this improper use can inflict pain and visible damage to human tissue when the impact is significant enough.

In Fountain, authorities are aware and said it hasn't become a major problem yet.

"We have only had one incident with the Orbeez," Schneider said. "No one wanted to press charges and the juvenile was released to a parent."

However, parents in Security and Widefield say there have been many incidents there.

One woman warned fellow residents on a local social media group that occupants of two BMWs – one black, the other white – were using paintball-type guns to shoot at each other and told her husband, "You're lucky we I don't shoot you" as they were speeding through the neighborhood.