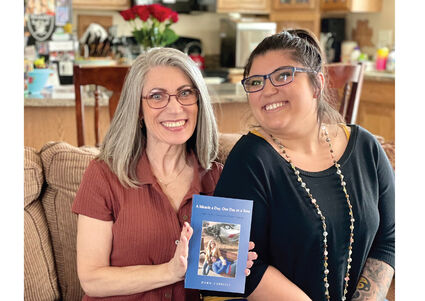 The term "traumatic brain injury," or TBI, is known to many people, particularly in a military community where veterans often experience this type of issue from battle injuries.

But TBIs can happen to anyone. In one Security family's case, it was the wife and a daughter of an Air Force member who ended up TBI patients after a routine day in their community turned tragic.

Dawn Corbelli and her daughter, Veronica, consider their survival of a catastrophic car accident at the intersection of Bradley Road and Powers Boulevard in 2008 – long before a traffic signal existed there – to be nothing less than a miracle.

But while they overcame those severe physical injuries, a new pain lay ahead. It wasn't until some time had passed and the reality of TBI set in that they suddenly felt the loneliness that accompanied it. Friends had a hard time understanding their new personalities, which changed from the brain trauma. Veronica, for example, lacks impulse control and often states things aloud that seem inappropriate, blunt or crude, and some people could not deal with this new normal.

"I will always be like a 15-year-old in some ways," Veronica said.

"She has no filter," Dawn explained.

Dawn lost a lot of memory and sometimes loses track of what she's doing or where she's going throughout the day.

After a while, the Corbelli family – once a hub of social life – felt isolated.

But Dawn finally channeled those feelings into a mission to help other TBI sufferers know that they are not alone, and that there is hope. She did that through a newly published book called "A Miracle a Day, One Day at a Time: Hope After Traumatic Brain Injury."

"God wrote my book, because I don't remember most of what's in it," Corbelli said.

She said replaying a lot of the events surrounding the accident and its aftermath was almost more painful to relive while writing the book than her initial experience, but it's worth it because she wants to help others avoid some of the pain she lived through in the 14 years since that terrible day. The author hopes to help TBI survivors, caregivers, family and friends to better understand the impacts of TBI and how it affects people.

Reaction to the book so far has been resoundingly positive. One reader refers to it as her "TBI Bible" and reads it over and over, saying she's never found anyone else who truly understood.

Corbelli describes her candid book as "a gripping memoir about our family's journey through recovery after a near fatal car accident" and says the book is about "traumatic brain injuries, mental illness, family, friends, faith, hope, love, and joy."

In an eerie coincidence, Dawn and Veronica's accident occurred exactly one year to the day after a close friend of Veronica's was in a fatal car crash just a mile away.

On this day, Veronica, then 15 and a sophomore at Mesa Ridge High School, was driving with her learner's permit as the pair took food to a family whose family member had been shot.

They were T-boned on the driver's side. Veronica's injuries included a sheared brain stem, bruised frontal lobe, broken hips and ankle, fractured pelvis, and more. Some doctors did not expect her to live, and she spent two weeks in a coma.

Dawn suffered numerous injuries as well, and her memory continues to be a major obstacle.

Dawn's husband, Greg, was a silent support in the months and years that followed. Although he doesn't talk about it much, he suffered too. 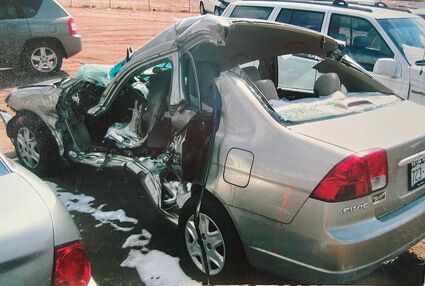 This photo of the Corbellis' car after their near-fatal accident in 2008 shows just how severe the impact was.

"He picked up the pieces," Dawn said.

The couple's other daughter, Kylie, also stepped up to help care for them.

Dawn hopes the family's story, told candidly in her book, brings comfort and hope to other TBI survivors.

The book is available through many national retailers and BookBaby, the company she used to publish it. To order online, visit https://store.bookbaby.com. The Fountain Valley News office has author-signed copies available for sale at 120 E. Ohio Ave. in Fountain (10 a.m.-4 p.m. Mon-Thurs., 10 a.m.-3 p.m. Fri.).

To keep up with the Corbellis and updates about the book, visit https://www.facebook.com/AMiracleaDayOneDayataTime

Did you know? March is Brain Injury Awareness Month. To learn more, visit the Brain Injury Association of America at https://www.biausa.org