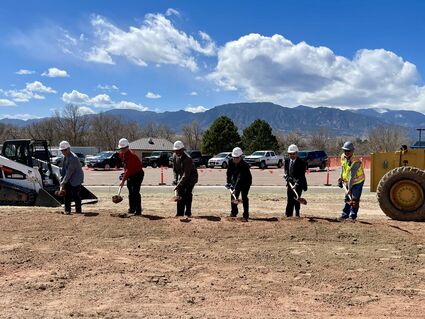 Officials celebrated the beginning of construction on a new Recreation Center at Widefield Parks and Rec on Tuesday, April 5, with a ceremonial groundbreaking.

Work has begun on a major facelift and expansion for Widefield Parks and Recreation at 705 Aspen Drive in Security. Crews began the initial prep work last week, and the official groundbreaking was held Tuesday, April 5.

Construction will have an impact on parking and field access for upcoming youth sports games, WPR Manager Nicole Reeves said in a letter to families. The parking lot between Field 1 and Field 2 will not be accessible, nor will the walkway between Field 2 and Red Field. Attached is a map of the fields that outline the inaccessible areas and available parking spaces. There is also parking around the community center building, but it may be busy with pool and library traffic.

At the groundbreaking, those involved in this new venture – including architects LKA Partners and Nunn Construction – discussed the many changes coming to the WPR campus.

The cornerstone will be a new 65,000-square-foot Recreation Center. The first floor will include a gymnasium containing three full-size basketball courts, dividing curtains, storage rooms, and a suspended walking track around the interior perimeter; two community meeting rooms with a kitchen; a child watch/preschool area, with storage, and teacher work rooms; an administration area; and men's and women's locker rooms. 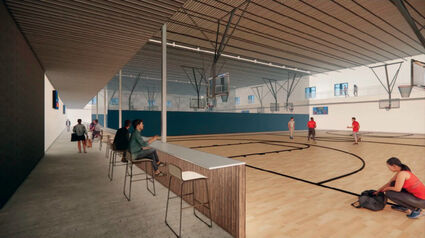 The indoor basketball courts are just one component of the new rec center, as designed by LKA Partners.