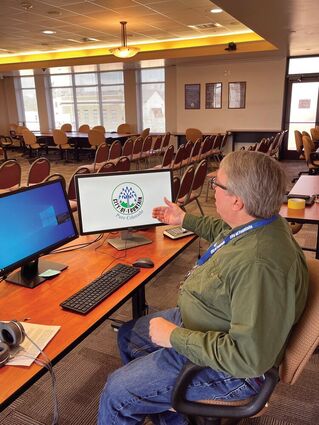 Paul Lavelle, deputy director of Technology Services for the city of Fountain, explains some of the audio upgrades at City Hall recently.

From now on, many people who wear hearing aids will be able to automatically tune in to whatever is being discussed at Fountain City Council meetings (or any other meeting being held in Council chambers).

That's because the staff of the Technology Services department for the city of Fountain has installed a hearing loop system in the city council chambers. That system features copper wires placed under the carpet which then are tied directly into the PA system. That allows people with hearing aids that are T-coil capable to hear the conversations directly in their hearing aids instead of the voices going through the PA system first.

The wires send out electromagnetic fields around the copper and the hearing-aid-wearers' devices pick up the audio more clearly than the usual method, according to Paul Lavelle, deputy director of Technology Services for the city of Fountain. He added that some hearing devices will pick up the signal automatically, while some others have to flip a switch. He said not all hearing aids have the T-coil capability.

Lavelle noted that some smaller T-coil devices have also been installed in the upstairs reception area, municipal court, utilities customer service, and at the Police Department's service window.

More audio enhancements will be done in the near future in various locations around the City Hall's conference rooms, as well as in the Public Health office on Hwy 85-87 shared with the Office of Emergency Management, in the old K-Mart building.

In addition to those public service upgrades, the Technology Services department has also replaced the old voting boards used for years to register the votes of Council members. Instead of the old system, there now is in place a software-based projector which will show the votes, as well as other information, on a screen which pulls down along the north side of the Council chambers.

Some of the funding for both projects came from a federal ARPA grant, and also from SIPA-the Colorado State Internet Portal Authority, which is earmarked for technology projects for the public benefit.