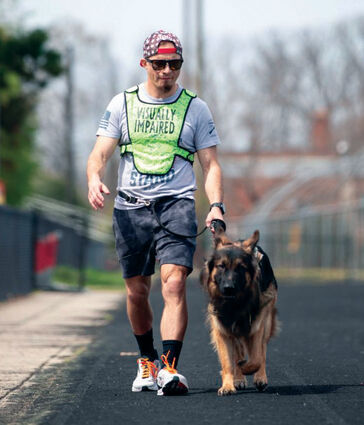 Retired U.S. Army Staff Sgt. Michael Murphy and "Maverick" are on the Invictus Team U.S. This year, 65 competitors will represent Team U.S. at the Invictus Games in The Hague, the Netherlands, from April 16-22.

FORT BELVOIR, Va. - Staff Sgt. Michael Murphy has taken on some hardcore cycling challenges during his time at the Fort Carson Soldier Recovery Unit (SRU), from traversing the Rockies to battling through a storm at the Beartooth Pass. But there's something different about getting chosen to represent Team U.S. for the Invictus Games in the Netherlands.

"I still can't believe it," Murphy said. "Every night I get emotional. Actually getting to wear the red, white, and blue and everything says United States on it - it's still mind-blowing that I'm on Team U.S. It's like a dream come true since...