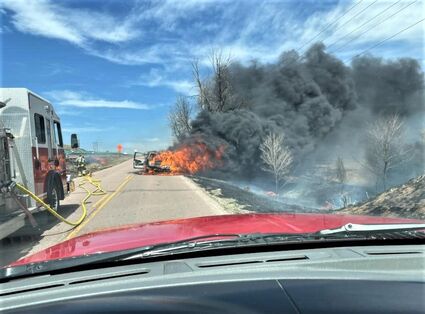 Photos courtesy of City of Fountain

This vehicle caught fire on northbound I-25 in Fountain, then inadvertently started a brush fire while pulling over to the frontage road, Bandley Drive, around noon Tuesday.

The week got off to a rough start, with multiple major accidents and a grass fire along I-25 in Fountain. The incidents spanned Monday and Tuesday, caused lane closures, several hours of firefighting efforts, and a helicopter transport for one accident victim.

Around 5:30 p.m. Monday, April 18, Fountain Fire Department (FFD) responded to a serious traffic accident on the northbound side of I-25, just south of the South Academy Exit (exit 135). The initial information was a vehicle rolled over multiple times and ended up down the embankment on the east side of the interstate. FFD also received reports that several people were trapped inside the vehicle.

Once FFD units arrived on scene, it was determined that the passenger was partially ejected and trapped between the vehicle and a wooden post. Due to the extent of the entrapment, another Fountain Fire engine was requested to respond along with Lifeline 2, which is a UC Health EMS Helicopter.

Calls of this extent require a lot of Fire and EMS personnel in order to provide the care needed, officials explained. The units who responded to this accident:

"To everyone who was stuck on I-25 during this time, we want to thank you for your patience," a department media release stated. "FFD works quickly and efficiently to get patients the medical care they need, and that is their No. 1 priority in situations like this."

Then on Tuesday, just after noon, FFD responded to a reported vehicle fire that started multiple vegetation fires along I-25 and Bandley Drive for approximately 1 mile.

Officials say a vehicle caught fire while traveling northbound. The driver was alerted to the fire by another driver.

"They drove through the median to access Bandley Drive, which is the frontage road along I-25 between the 128 and 132," Fountain Public Safety PIO Lisa Schneider said around 1 p.m. "Due to the vehicle being engulfed in flames, it caught the surrounding brush on fire. FFD has a good handle on this fire. Only one structure is threatened and the residents have evacuated."

All occupants of the vehicle on fire were able to escape and there were no reported injuries to civilians, fire personnel or police personnel. There was no damage to the home that was threatened and no livestock were injured.

Northbound lanes of I-25 were closed for short time while crews got the fire under control. Traffic was rerouted to Hwy 85.

Fire crews worked hard to contain this fire and it was reported under control at 1:30 p.m., and fully contained a couple of hours later. 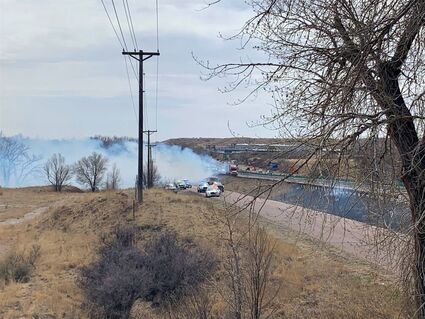 The Tuesday vehicle and brush fire from a distance.

"We want to thank Fort Carson Fire personnel for covering the City of Fountain while FFD was working this incident," an FPD statement said. "We are so thankful for the collaboration we have with our surrounding fire agencies."

Meanwhile, there was also a crash involving multiple vehicles just north of this area near Mesa Ridge Parkway. This involved several vehicles and a motorcycle. Colorado State Patrol responded. The motorcycle driver was transported by FFD ambulance to a hospital.

Later, that motorcycle driver commented on the city's Facebook post describing this incident, apparently from the hospital: "I'm the guy on the motorcycle! Not my favorite day lol." He shared, "My guardian angel got put to the test today," adding he was heading into surgery soon.