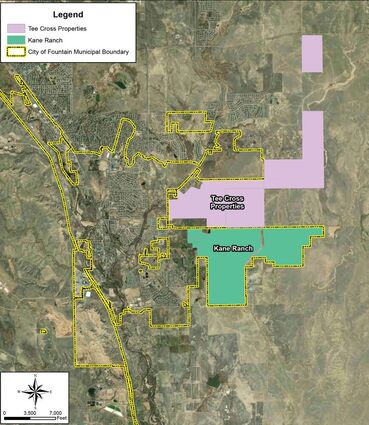 This stark contrast is just one small illustration explaining why Fountain officials are worried about possible development of thousands of new homes east of the city, if Colorado Springs were to annex a large swath of property, leading to the development of a Briargate-like area known as Amara.

Public safety is one of the issues at the forefront of a debate about whether Fountain should de-annex the 2,400-acre Kane Ranch.

The request is expected to return to the City Council on April 26. When the issue was introduced on Jan. 25, the council held a lengthy public hearing before voting to postpone the matter so that all parties could have more time to discuss and understand the complex issues involved.

At the time, one of the principal representatives for developer La Plata, Doug Quimby, said that his group hoped to settle the matter amicably at the council level; however, he noted that it could head to court if the council denies the de-annexation request.

At the center of the debate is a claim that the city did not hold up its end of the bargain in the 2008 annexation, at which time the water supply was said to be adequate for the site's eventual development.

It wasn't until last year, when La Plata wanted to move forward with development plans, that the city announced it might not have enough water to serve such a large development along with numerous other projects already in various stages of planning around the city.

"We invested countless hours and hundreds of thousands of dollars on getting this deal done in the city of Fountain," Quimby told the City Council in January.

City leaders say they are most concerned with the impacts of this property once developed, which would add thousands of new homes and some businesses to the area east of Fountain. Colorado Springs allows higher residential building densities than Fountain.

La Plata has said it hopes to build a Briargate-like neighborhood on Kane Ranch and the adjacent Tee Cross property, which currently is in unincorporated El Paso County. Collectively, the proposed development is called Amara.

La Plata already has submitted plans to annex the 3,200-acre Tee Cross into Colorado Springs. Officials say Colorado Springs would consider annexing both properties into its city limits, and that it would service it with water and other utilities, public safety, and so on.

However, the large influx of traffic from the anticipated quantity of new homes worries Fountain-area residents and city leaders, who expressed their fears at the Jan. 25 council meeting. Citing already ailing streets and increasing vehicle counts, they said the addition of tens of thousands of new people on the east making their way directly through Fountain to get to I-25, for example, is a grave concern.

Similarly, they questioned the ability of Colorado Springs fire and police departments to adequately respond to emergencies in Amara, considering it's not near any existing Colorado Springs stations. Officials have said a response time for Colorado Springs Police to this area likely would be 20-30 minutes.

Fountain Deputy City Manager Todd Evans said last week that Fountain representatives have had a few meetings since January with La Plata, El Paso County, and Colorado Springs to hash out these concerns in greater detail and discuss possible solutions. Although de-annexation from Fountain and annexation into Colorado Springs is not a done deal, Evans said he and his peers are trying to come up with plans to deal with that scenario should it materialize.

How to get all of these entities to partner on a regional transportation plan has been challenging, he said. One option Fountain pitched was to implement a regional traffic impact fee to help pay for new road construction in the various jurisdictions to help carry the additional traffic. Evans said the county seemed supportive, but Colorado Springs was not.

La Plata asked for a list of specific projects it might partner on with Fountain to address the concerns. Evans said the city offered a number of suggestions, already highlighted in the city's Master Transportation Plan, such as Squirrel Creek, Link, Marksheffel, as well as C&S and Ohio. He explained there is a future link from Squirrel Creek to Comanche Village Drive to bring vehicles from the east over to I-25.

As of press time, the city had not received feedback from La Plata on this item.

"We truly believe that transportation is going to be one of the biggest impacts on quality of life for everyone in the Fountain Valley," Evans said.

Regarding public safety, Evans said Fountain had good discussions with Colorado Springs police and fire departments. Good news is that Amara could have a spec home designated for a one-vehicle, two-person fire crew there. Evans said this is how the scenario was explained to him.

However, in the broader picture, Fountain is looking for new ideas to deal with the imbalance in fire department mutual aid responses. Those typically are done as needed, on an honor system, with no reimbursement to the responding department.

"It's become too much," Evans said.

The water issue has centered largely around findings in Fountain's newest Water Master Plan indicating there may not be enough water to service such large developments unless Fountain acquires new sources of water. Evans said recent discussions about the city possibly obtaining rights to Martin Marietta mining reservoirs are somewhat promising, but they are a long-term option – not an overnight solution. Evans said some residents may ask why the city doesn't just agree to serve Amara to keep it in the city limits and figure out a solution as the project moves along. He said the future is too uncertain to make such a promise, and the potential impact on current ratepayers could be huge.

"That's a dangerous road to go down," he said.

Fountain Sanitation District (FSD) had its own objections to the de-annexation request. When voting to table the ordinance at the January meeting, Council Member Gordon Rick said he wanted to give the city staff and FSD time to meet with the developer and resolve the issues presented to council.

"In particular I was concerned that FSD stated they were not given proper legal notice and that they had invested a lot of ratepayer money into preparing for Kane Ranch," Rick said. "I did not want FSD to assume such a loss of money without giving FSD a chance to get some of it back from the developer."

FSD General Manager Jim Heckman said the district had included Kane Ranch in its overall development plan under the assumption it would be developed in Fountain.

"The first objection I raised was about the investment FSD has already made with Lower Fountain Metropolitan Sewage Disposal District (LFMSDD)," Heckman said. "FSD has the majority capacity ownership in both the Harold D. Thompson Regional Water Reclamation Facility (HDT) and interceptor pipelines going to the HDT facility.  FSD bought and installed the sanitary infrastructure necessary to meet its projected 20-year growth plan. So, the main infrastructure to take the sanitary flows from the Ranch is already installed today ready to transport sewage to the HDT facility."

He said Colorado Springs, by its charter, must become the sole utility provider for Amara and similar properties it annexes; but Colorado Springs has no infrastructure around for miles.

"So, FSD through its LFMSDD membership is more suited to be the wastewater service provider," he said.

However, FSD did meet with La Plata and Colorado Springs Utilities recently to discuss wastewater service and the possibility of FSD retaining its ability to remain the wastewater service provider. There are many details still to be worked out before it can be presented to the pertinent boards for consideration.

Heckman's concern about proper notice prior to the January council meeting was due to FSD not receiving a copy of the de-annexation application. FSD was entitled to such as a special district affected by the issue, he said.