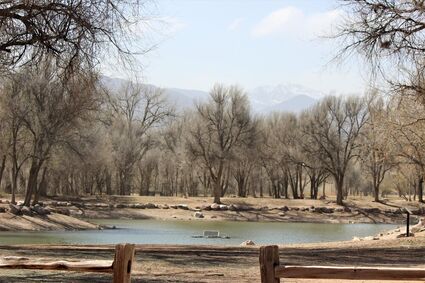 Few people were out at Willow Springs Ponds on Friday, with high winds and dust blowing around most of the day. Officials say soon there will be signs advising people not to consume fish from these waters due to the recent discovery of PFOS, a type of "forever chemical," in these fish.

Don't eat the fish from Willow Springs Ponds. That's the message that will be going up on signs in the very near future now that officials have results of a study showing certain types of "forever chemicals" in fish from these bodies of water.

Despite the discovery, researchers say it's unclear whether eating these fish will actually cause harm to people.

"The project has a number of limitations and was too small to determine whether PFAS in the fish sampled are high enough to harm human health," according to a study summary.

As a precaution, "El Paso County Parks Department will post signs at Fountain Creek Regional Park in the next two to three weeks advising people not to eat the fish from that area," said Kristy Richardson, a state toxicologist with the Colorado Department of Public Health and Environment (CDPHE), in a letter to the Community Advisory Panel of the local health study known as CO SCOPE.

The research is a joint effort by the Colorado Department of Public Health and Environment (CDPHE), Colorado School of Mines, and Colorado Parks and Wildlife. In the summer and fall of 2020, they selected three bodies of water to evaluate levels of per- and polyfluoroalkyl substances (PFAS) in fish.

Most residents around the Fountain Valley are familiar with PFAS, which was found to have contaminated local groundwater due to firefighting foam used at Peterson Air Force Base (now Space Force Base). That discovery became widely known in January 2016, causing local water districts to shut down wells and switch sources.

Previous contaminations of groundwater by Schlage Lock many years ago required the installation of "air strippers," visible in the center of Willow Springs Ponds, to clean chemicals leached into the water supply. Those have been effective, Security Water District General Manager Roy Heald previously said. Some chemicals remain at the site, but they are at or under the EPA limit, he said.

However, those chemicals were known as PCEs, a totally different substance than the PFAS family. Heald said the news about PFAS in this water was not something he was expecting, but also not entirely surprising considering its proximity to other PFAS-contaminated waters.

"Obviously, the aquifer and the creek and the ponds are all connected," he said.

"Fish in Fountain area are the highest," she said. "And some of those exceed consumption advisory levels in other states."

The purpose of this study was "to gather preliminary data to help us understand how people could be exposed to PFAS through fish and evaluate if Colorado should consider health-based PFAS fish consumption advisories," the report explained.

Staff collected and analyzed 49 fish representing 10 different species across the food chain from Willow Springs Ponds, Mann-Nyholt Lake in Henderson, and Tabor Lake in Wheatridge. Results showed one PFAS, perfluorooctane sulfonate (PFOS), in 100 percent of fish tested. PFOS concentrations varied by species and waterbody. Many other PFAS were also found in fish, though at much lower levels.

PFOS concentrations in fish ranged from 0.67 ng/g to 241 ng/g. Average concentrations of PFOS in the water were: 8.9 parts per trillion (ppt) in Mann-Nyholt; 10.4 ppt in Tabor Lake; and 101 ppt in Willow Springs Ponds.

The two types of fish with the highest concentrations of PFOS were White Crappie and Northern Pike; coming in a distant third was Large Mouth Bass.

The report noted that PFOS was the only type of PFAS found in fish at levels of "potential concern."

"These results are comparable to concentrations found in other fish sampling projects across the country," researchers noted. "In states that have fish consumption guidelines for PFOS, the 'Do not consume' level ranges from 50 ng/g to 300 ng/g, with most advisories set at around 200 ng/g. Five of the 49 (approximately 10 percent) fish samples from our pilot project had PFOS levels above 200 ng/g. All five of these fish were caught from the Willow Springs Ponds."

The report also notes that the U.S. the Food and Drug Administration (FDA) has also found PFOS at varying levels in fish products sold in grocery store. PFOS has been found in samples of frozen fish sticks (.033ng/g), canned tuna (.076 ng/g), and baked cod (.098 ng/g).

Researchers say those studies indicate that the levels of PFOS found in the general food supply are not likely to cause harm. However, the learning curve continues.

"Though research on the topic is evolving, some studies show fish may be one of the most significant contributors to dietary PFOS exposure. The significance of eating fish compared to other ways people may be exposed to PFOS will vary depending on how much fish is in a person's diet and where the fish come from (i.e., caught locally or bought at a grocery store). The small amount of data collected in this pilot project adds some answers to this important public health question and will help CDPHE make decisions about how to best address PFAS exposure in Colorado. CDPHE evaluates health risk from PFAS from a total exposure perspective that takes into account multiple sources, including both water and food."

The U.S. Environmental Protection Agency (EPA) will begin work to guide development of fish consumption advisories starting this summer, and CDPHE will evaluate this guidance, sharing information with other agencies and the public, and conducting additional testing of PFAS in fish to "find innovative solutions to protect Coloradans."

In the meantime, the local CO SCOPE health study continues to recruit participants. The study team is hoping to determine how exposure to these "forever chemicals" may be impacting the health of residents who drank contaminated water. This study is part of a nationwide study funded by the Agency for Toxic Substances and Disease Registry (ATSDR). 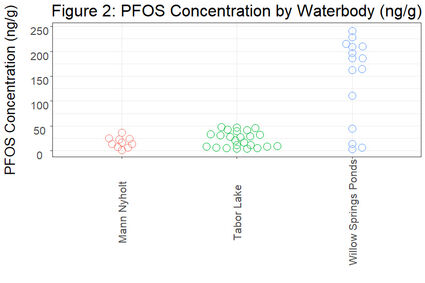 A chart from the "PFAS in Fish Pilot Project Summary Report" prepared by CDPHE's Toxicology and Risk Assessment Section shows the high concentration of PFOS in fish from Willow Springs Ponds compared to two other bodies of water in Colorado.

The study is open to anyone who lived in Fountain, Security, Widefield or Stratmoor Hills between 2006 and October 2015 to participate, particularly children. Children must be age 4 or older, but there is no upper age limit for adults.

Those with immediate questions or concerns about the fish may contact the CDPHE toxicology hotline, ToxCall, at: [email protected] or 303-692-2606.

To learn more about this project, read the PFAS in Fish Pilot Project Summary Report: https://drive.google.com/file/d/1Q3CDUGFGRI6wcp5kbk_DjOtcLqnp8PMh/view