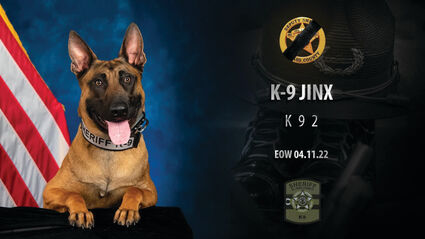 El Paso County Sheriff's Office has announced that on Thursday, April 21, there will be a public memorial service for Jinx, the K-9 shot and killed by an armed suspect recently.

Sheriff Bill Elder, along with the members of the El Paso County Sheriff's Office, invite law enforcement partners and the public to honor K9 Jinx at New Life Church located at 11205 Voyager Parkway in Colorado Springs. The doors will open at 9 a.m. for seating. The service will begin at 11.

New Life Church will provide a livestream of the service that will be found at the following URL: https://boxcast.tv/view/officer-jinx-memorial-service---april-21-2022-nsid94bi8cdtlv1araod 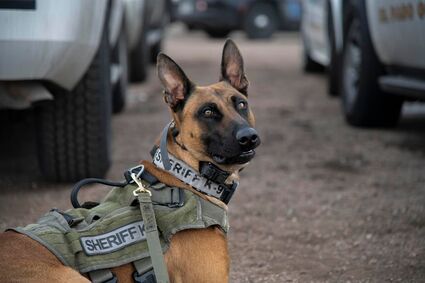 EPSO's beloved K9 Jinx was shot and killed in the line of duty by an armed suspect in Manitou Springs on April 9. EPSO deputies and Manitou Springs Police officers had responded to a report of a person menacing others with a firearm in the 900 block of Manitou Avenue around 11 p.m. According to Colorado Springs Police Department, the lead investigative agency in this incident, the suspect fired at officers and they returned fire. The suspect was killed. No other officers were injured.

The suspect later was identified as 67-year-old Wilford Robert DeWeese of Cape Canaveral, Florida. The cause and manner of death will be determined by the El Paso County Coroner's Office. This case is actively being investigated by detectives from the Colorado Springs Police Department's Deadly Force Investigative Team.

"K9 Jinx's partner and family, his law enforcement family, and the Pikes Peak Region have suffered a tremendous loss," a spokesperson said. "The El Paso County Sheriff's Office values the strong relationship with neighbors and law enforcement partners, and are grateful for the outpouring of sympathies that have been shared over the last week."