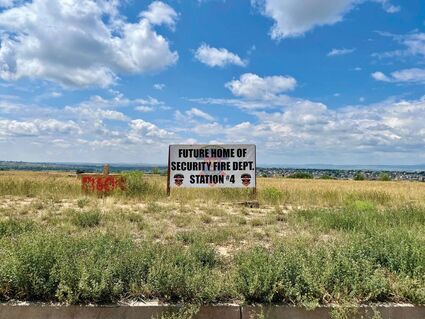 The future site of Security Fire Station 4 on Wayfarer Drive. No start date for construction has been released yet, but building permits are now in hand, Fire Chief David Girardin says.

Security Fire Department finally has a construction permit in hand for the new fire station on Wayfarer Drive, meaning building can begin soon. Station 4 will be located at 7600 Wayfarer Drive in The Glen neighborhood, just east of the Powers Boulevard and Mesa Ridge Parkway East intersection.

Last fall, residents in the fire protection district approved a 6.4-mill increase, the district's first such request in over a decade.

Although a new Station 4 was accounted for in the budget already, staffing for it was not. SFD says once the new station is operational, it will help cut down on response times, especially in the rapidly growing eastern part of the district.

Department leaders have said they expect they'll need a Station 5 in the Lorson Ranch area at some point, too.