April is recognized as the Month of the Military Child 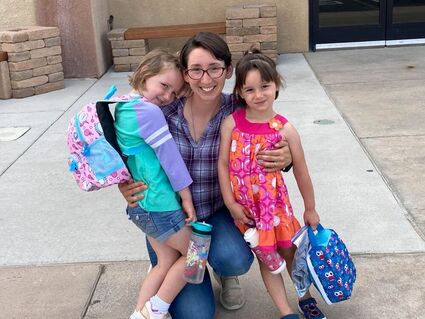 Cadet Julia Scott with her two kids, Allison and Madison Scott, after school smiling for a photo on Fort Carson in 2021. Julia makes time for her children after a busy work day and actively engages in activities with them.

Since the mid-1980s, the month of April is recognized as the Month of the Military Child. From as far as the inception of the military, children have sacrificed alongside their parents as dependents, loved ones, and most importantly, rocks for brave service members.

Army Cadet Julia Scott, who is going through the green to gold program, talks about her time in the military and how her children were impacted.

Scott explains how worried she was about the impact the military would have on her life. Instead of fitting the military into her lifestyle, she had to figure out a way to fit her whole family into the military lifestyle.

Scott's biggest lifestyle change was that she would not have as much time with her kids.

"I was a stay-at-home mom before joining the military, my kids weren't used to not having me around. That was a major consideration that I had a lot of uncertainty about," said Scott. "I've missed a birthday, and I will probably miss more coming up."

While it is upsetting for parents to be away from their children, the children understand and are extremely adaptive to this change, much like Scott's children. One of Scott's children, Allison Scott, a 6-year-old student at French Elementary School, continues to find a silver lining while moving around.

"I like traveling because I get to meet new friends," says Allison. "It's sad when I leave my friends, but I can make new ones."

The military lifestyle allowed Scott's family to travel and see new parts of the country. Individuals working in education come in contact with many military children, and experience what it's like to work with children who are constantly in new environments due to the parent's work situation.

Michelle Blasko, principal of French Elementary in Widefield School District 3, mentions a moment she had with one of her students.

A fourth-grade student walked up to Blasko and mentioned how her mother is overseas because she works in the military. At that time her mother was deployed, but the child stayed positive by saying her mother was keeping everyone safe.

Blasko describes military children as more independent and resilient than the average child, because the children of military families are making sacrifices alongside the parents. Blasko also mentions children are missing parental figures during key developmental time.

"Military children deserve to be treated like all other children. Military children can be flexible and adaptable, but that doesn't mean that they are superheroes," says Blasko. "They are still children who need to be loved and cared for as we would for any non-military child."