Wildland fire in Fountain under control 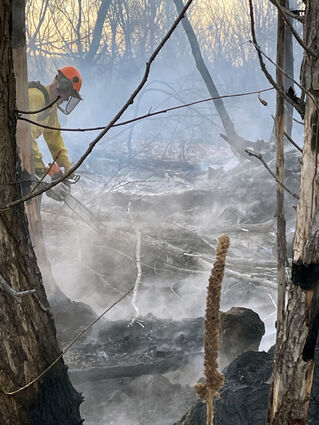 Firefighters from several agencies worked to put out a wildland fire near Fountain Creek and Duckwood Road early Thursday morning.

When fire crews arrived on scene, heavy smoke and flames were visible. The fire was approximately one mile west of Hwy. 85, which made it difficult for crews to access the fire, officials said; but the mild weather conditions this morning made it easier for fire crews to get this fire under control quickly.

The fire is 100 percent contained and it has burned less than an acre. No structures were threatened, and there have been no reported injuries. Fire crews are still monitoring the area and will be several more hours before they clear the scene.

"The cause of the fire is still under investigation," Fountain Public Safety PIO Lisa Schneider said. "However, it could possibly be from a lightning strike due to the late afternoon storm we received in Fountain yesterday."

Various professional reports on this matter state that lightning strikes to trees can cause delayed ignition and fire, depending on the circumstances. Some residents in the Fountain Valley did see lighting Wednesday afternoon.