Profiles in Space: Commander to contractor – the journey to SMDC, and love of a job 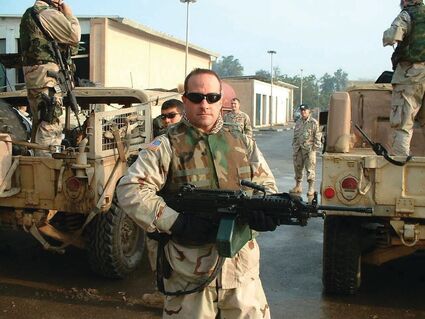 Then Maj. Andrew Grantham prepares to go on a convoy while deployed to Baghdad, Iraq, with the Combined Joint Special Operations Task Force in 2004.

PETERSON SPACE FORCE BASE – Ever wonder who comes up with the training exercises Soldiers carry out in the U.S. Army Space and Missile Defense Command? Well wonder no more. It's guys like Andy Grantham at USASMDC's G-37 Exercise Branch that develop scenarios and training objectives for tier-one level exercises.

Grantham, in his mid-50s, has been with the command since 2013, and in his current position since 2019. Before coming onboard with the command, he was in the Colorado National Guard, and in the active-duty Army before that.

Grantham, originally from Oklahoma City, knew he wanted to join the military after an excursion with his mom and dad through Checkpoint Charlie into then East Germany, while he was living as a dependent in West Germany during high school in the early-to-mid-80s.

"It was then and there I knew I wanted to join the Army," Grantham said. "Just seeing the state of East Germany, and how they were living compared to the West - I wanted to make sure the U.S. never fell into that sort of realm."

He commissioned as an intelligence officer into the Army in 1988, after graduating from Wright State University in Ohio. Upon graduating from the Intelligence Officer Basic Course, Grantham's first duty station was in Wiesbaden, Germany, where he collected intelligence on the East Germans and Soviets. He witnessed firsthand the fall of the Berlin Wall in 1989. The country erupted in jubilation, but just a couple short years later he found himself in Saudi Arabia for Operation Desert Storm.

Grantham was a first lieutenant during the brief 1991 war with Iraq, and commanded a detachment of 220 Army and Air Force personnel running intelligence collections on the Iraqi army.

"It was an exciting time," Grantham said of those first few years of service. "Definitely some of the highlights of my career."

Another highlight was commanding the Warrior Transition Battalion at Fort Carson for three years from 2008 to 2011. The 900-plus person battalion, made up of all three components of the Army, (active duty, National Guard and Reserve) was responsible for helping Soldiers with post-traumatic stress syndrome, traumatic brain injuries, amputations, terminal illnesses, and many other life-changing situations. Grantham had nurses, doctors, psychologists, and a host of other medical personnel under his command.

"Being an intel. officer, and going into that job was very challenging, but also very rewarding," Grantham said. "It was a trying time for the Army overall."

Grantham retired from the military as a colonel after commanding the 89th Troop Command in the COARNG. He finished with 30 years of combined active duty and National Guard service.

After coming onboard with USASMDC, Grantham helped develop the Army Space Training Initiative after the command was directed by the Chief of Staff of the Army to train all Soldiers on the effects of space.

"We did a big push to train division staffs and subordinate brigade elements on the effects of space and how it supports maneuver units," Grantham said. "If the units lost GPS, how would they maneuver effectively?"

Grantham enjoys the "what if" scenario development of exercise planning. If the U.S. had to fight a near-peer in space, what would USASMDC do? If theater commanders needed Army space assets forward, how would the command get them there and how long would it take? If the U.S. had to call up the National Guard and Reserve space elements, how long would that take, and what equipment would the command need to provide to make them effective downrange?

"If we were getting degraded through cyber and space attacks, how would we solve those problems," Grantham said. "My team allows the staff to think through various problem sets and come up with solutions to them."

He also likes the travel involved with the job, although there hasn't been much of that over the last two years with COVID restrictions, but it has picked up recently. He returned from a concept development conference (CDC) attended by representatives from the combatant commands. CDCs are used to develop the framework of exercise scenarios, taking into account each of the individual command's exercise objectives and desired goals.

"I will say one thing," Grantham said. "Over the last 10 years I have worked here, there have been a lot more requests for space assets on the battlefield to help support the infantryman at the tip of the spear. To bring space to the Soldier on the ground is very exciting."

Grantham plans on being in the command for an indefinite length of time. He loves his job and says he is always learning something new.

"Do I miss the Army?" Grantham asked himself. "Yeah, but it's also cool to be a contractor in SMDC. Space is the next area that is crucial to where the U.S. fights its future battles."

He is happily married with three grown kids, all in their 20s. He likes reading, writing and watching movies.