The Stratmoor Hills Water District and Board of Directors are proud to celebrate the completion of a $3 million centralized water treatment facility.

The water treatment plant, located off Glenarm Road, just west of Hwy. 85/87, was developed in partnership with the United States Air Force and a low-interest loan from the Colorado Water Resources & Power Development Authority. This new facility will deliver up to 1 million gallons a day of clean, safe drinking water, free from perfluorinated chemicals (PFOS and PFOA) to the Stratmoor Hills Community.

Prior to 2016, the Water District relied on groundwater from three wells to provide drinking water to the community of Stratmoor Hills. Once PFOS and PFOA were detected in the Widefield Aquifer, the Water District immediately terminated the use of wells and relied solely on its partnership with the Fountain Valley Authority, which delivers water directly from Pueblo Reservoir.

In 2019, the Water District received a low interest $3 million loan from the Colorado Water Resources & Power Development Authority to develop and build a centralized water treatment facility for all three wells. Although the project was delayed due to the ongoing pandemic, the Water District was able to work with its general contractor, Glacier Construction, to complete the new facility in early 2022. 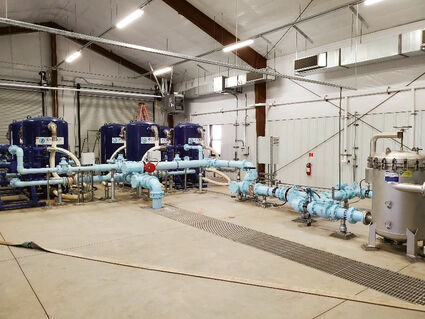 This new treatment facility will utilize cartridge, ultraviolet, and ion exchange filtration to deliver up to 1 million gallons a day of clean, safe, reliable drinking water to the community of Stratmoor Hills. This facility will also allow the Water District to utilize its three groundwater wells year-round, only relying on the Fountain Valley Authority on an as-needed basis.

The Stratmoor Hills Water District will hold an open house for the community members of Stratmoor Hills and the general public on Friday, May 20, from 1-3 p.m. at 3118 Glenarm Road, Colorado Springs, CO 80906.

Editor's Note: A similar facility under construction in Fountain north of Aga Park is nearing completion. Crews are putting the finishing touches on the building, and testing and startup of the systems will be underway over the summer. Further updates to come.