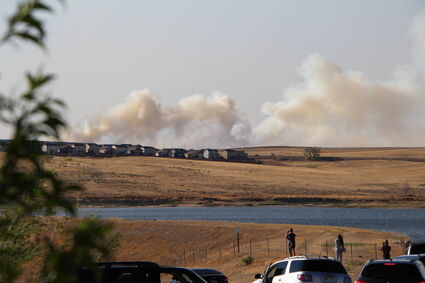 A number of people watched the smoke from Big Johnson Reservoir on May 12 as the Alturas Fire burned near the Amazon building.

A fire that started in the area of Alturas Drive in Security on Thursday afternoon caused numerous evacuations in residential neighborhoods and businesses, and a shelter-in-place order for Amazon and the Colorado Springs Airport (lifted later that evening).

As of 7 p.m. responders said they were making significant progress on the blaze, and residential evacuation orders for the area were lifted. Despite the fire's size and quick spread, officials say no buildings were damaged.

At 10 p.m., the Alturas Fire was 15% contained, with 182 acres burned. Firefighters remained on scene to patrol for any flare-ups and hotspots.

Lt. Deborah Mynatt of El Paso County Sheriff's Office said the fire started when a deputy was looking into a suspicious vehicle in the area of Alturas and Cresta Loma, north of Bradley Road, South of Milton Proby Parkway, and west of Powers Boulevard.

The deputy was "driving over a grassy area" when his cruiser's catalytic converter sparked a grass fire, and the flames spread very quickly.

"It was our deputy vehicle that caused this fire," Mynatt said.

The deputy responding to the suspicious vehicle was uninjured.

The "suspicious" vehicle in question was parked behind homes and was reported by a resident as "out of the ordinary" for that neighborhood. The vehicle determined to be parked on its owner's property, Mynatt said.

Security Fire Department was the first to respond to the fire around 3:30 p.m. Colorado Springs Fire Department assumed control of the operations as the fire grew toward the city limits. About 30 different fire apparatus, 110 firefighters and many other law enforcement officers assisted with the fire battle, evacuations, traffic control, etc. Fountain, Stratmoor, CSFD, Hanover, Fort Carson, Peyton, Calhan, Ellicott, U.S. Air Force Academy, Colorado Springs Utilities and Black Forest are among the agencies that sent crews to help.

The fire moved quickly due to the extremely windy conditions. Pre-evacuation status moved to mandatory evacuation status within two minutes, Mynatt said. Deputies went door to door to escort people out. A shelter was established at Calvary Chapel Eastside at 5070 Edison Ave.

The fire moved quickly along the Powers Boulevard corridor and into Colorado Springs, crossing Powers. 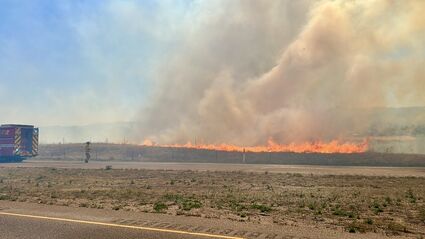 Flames spread quickly along the Powers Boulevard corridor in Security just west of the Amazon facilities on May 12.

"We had people ready for that," a CSFD spokesman said.

Many fire crews and other emergency responders were kept busy for hours battling the flames in windy conditions. The fire burned right up to a large retaining wall at the Amazon facility. It did not get much closer to the airport than that. The airport allowed a few outbound flights initially, and then stopped all incoming flights.

A helicopter made continuous trips to and from nearby Big Johnson Reservoir to gather water to dump on the fire, making each round trip in just a couple of minutes.

This fire was just one of several throughout Colorado Springs the same day. Later that evening, another fire broke out in Stratmoor Valley area but was contained quickly.

More updates will be provided as available.