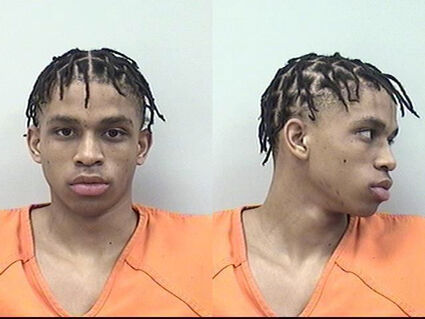 Police have arrested 19-year-old Nickilaus Oakley for an early Sunday-morning shooting outside the Kum & Go convenience store on Fountain Mesa Road that injured at least one.

Around 2:30 a.m., Fountain Police Department was dispatched to the store, where officers found an adult male with a gunshot wound to his leg.

The FPD's Investigations Unit responded to the scene and assumed responsibility for the investigation. Detectives determined occupants of at least two separate vehicles were involved in this shooting. Detectives were working to determine if the occupants of the vehicles were shooting at each other. One involved vehicle remained on scene and any other involved vehicles left the scene before officers arrived. The adult male who sustained a non-life threatening gunshot wound, was transported to a local hospital by Fountain Fire Department.

An FPD news release on Sunday stated "there does not appear to be any threat to the public and it is believed that all involved parties are accounted for."

On Monday, the El Paso County Sheriff's Office Tactical Unit executed a search warrant in this case on Judson Street in Widefield. The activity prompted a brief shelter-in-place order for neighbors and the nearby Talbott STEAM school.

"Detectives located evidence at the residence, but they did not locate the shooting suspect," a news release stated.

If you have any information about this incident, please call Detective Michael Bixby at (719) 382-4264. To remain anonymous, contact Crime Stoppers Tip Line at (719) 634-STOP (7867) or http://www.crimestop.net. If your information leads to a felony arrest, you could be eligible for a cash reward.