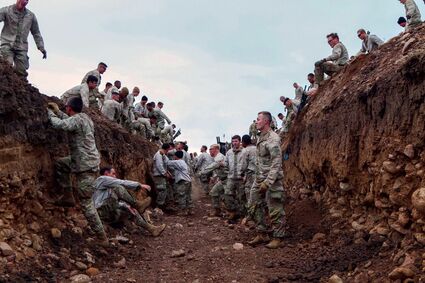 Soldiers and leaders assigned to 4th Infantry Division and Fort Carson climb in and out of an anti-tank ditch during Fort Carson's Ivy Week Utah Beach event May 23. The first two obstacles in the event symbolize the division landing and storming the beach on D-Day, June 6, 1944, with terrain covered in dunes and German defenses. 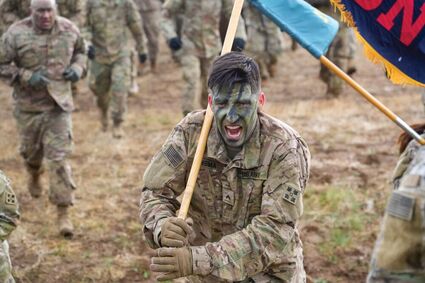 A Soldier charges the finish line of the Utah Beach physical training event that marked the start of Ivy on Fort Carson on May 23. The Utah Beach event pays tribute to the 4th Infantry Division Soldiers that stormed Utah Beach on D-Day.

More than 23 battalion teams, approximately 6,000 Soldiers, tackled the course; however, all of the obstacles remained a complete mystery to participants until the rules were read and the event began.

The intent of this year's Ivy Week is to recognize and honor the 4th Inf. Div.'s legacy, test Soldier and unit readiness and build Ivy Spirit.

On June 6, 1944, known as D-Day, the 4th Inf. Div. was the spearhead seaborne division that stormed the beaches in Normandy, France.

The division later went on to liberate Cherbourg, along with the 9th Infantry Division. Soldiers from the 4th Inf. Div. also led the St. Lo breakout, were the first Allied troops into Paris, and were the first to penetrate the Siegfried line during the first four months of the eleven-month fight across Europe.