Late May snow day turns catastrophic for some 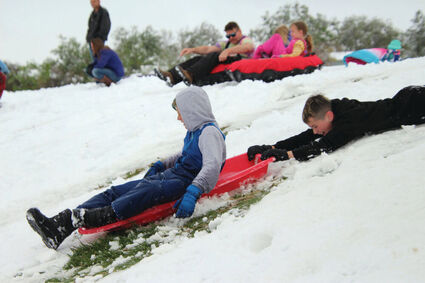 A late-season snowstorm that rolled into the region the evening of Friday, May 20, provided plenty of fun for those interested in playing in the snow over the weekend. However, the snowfall, which totaled around 10 inches for much of this area, wreaked havoc with trees and power lines, causing numerous outages and broken limbs.

Fountain has designated a drop-off point at Metcalfe Park, available to Fountain residents only. The city will have someone manning the south parking lot 9 a.m.-6 p.m. now through Friday, May 27.

City officials noted the pile turned into a "tree wall" rather quickly, and it's expected to continue to grow all week. They asked for patience as they deal with the cleanup here and around the city since personnel and equipment for this type of effort are limited. Two chippers will be used to mulch the materials, but that won't be enough to take care of all the yard waste, Deputy City Manager Todd Evans said.

Residents of El Paso County may drop off at Rocky Top Resources, 1755 E. Las Vegas St., Colorado Springs. Residents would need to load and deliver branches to this location. If they wait until Saturday, regular tree branches (not stumps or junipers) are only $5 per load, according to the price flier: http://www.rockytopresources.com/wp-content/uploads/Dumping-Prices-3-1-22.pdf

Waste Connections Landfill on Squirrel Creek Road, about 2.5 miles east of Link Road, offers 50 percent off to city of Fountain residents, members of the military, and Waste Connections customers who wish to dump unwanted items at the landfill themselves any time of year.

This weekend, the landfill is holding a special clean-up event for Fountain residents. More details and special rates can be found on p. 6.

The Fountain Fairview Cemetery also suffered a significant amount of downed trees and limbs. Crews were busy cleaning up.

"No headstones were damaged, just knocked over," Parks Superintendent Jim Watson said. "Have a lot of hanging branches that are out of reach." 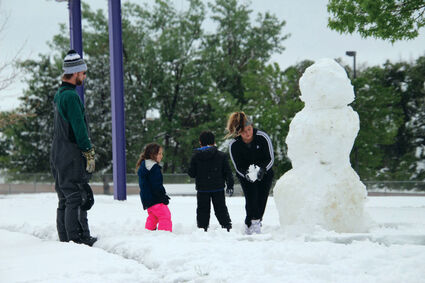 The Rushay family worked together to build a large snowman at the high school's snow-covered track.

The cemetery cleanup was expected to be completed Wednesday.

Officials said the recent snow and rain was not yet enough to cause a change in the Stage 2 Burn Restrictions currently in effect throughout the region. In fact, on May 24 the Fountain City Council considered a new ordinance that would codify the city's restrictions on open burning and fires to allow more enforcement of violations. More on that in next week's issue.