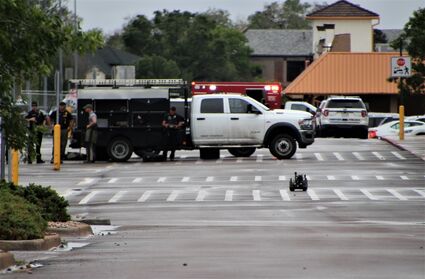 A bomb squad from Colorado Springs uses robotic equipment to clear Walmart of any potential explosives the morning of June 1.

NEW UPDATE 12:45 p.m.: There were reports of a similar incident at the shopping center with Arby's, McDonald's, Family Dollar on Mesa Ridge Parkway. FPD reports that there was an automated bomb threat over the phone to the Family Dollar. They self-evacuated, and police cleared the building. At 12:45, FPD reports that no device was found, and an all clear was given.

UPDATE: The all clear has been given, and Walmart has reopened as of 11:42 a.m. Wednesday.

ORIGINAL (10:50 a.m.): Fountain Police took a suspect into custody after a bomb threat at Walmart and McDonalds on Hwy. 85 Wednesday morning.

Police say the man had a bag with him and told McDonald's and Walmart employees that he had a bomb. Responders blocked all entrances to Walmart.

The Colorado Springs bomb unit is clearing the area making sure it's safe and checking the package, according to Fountain Police Lt. Mark Cristiani. All entrances to that area are blocked. 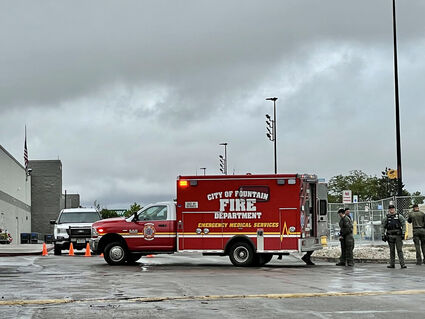 Fountain first responders block the entrances to the Walmart shopping center on Hwy. 85 the morning of June 1 due to a bomb threat.

"Walmart is closed until further notice. We will provide an update once they are reopened," Cristiani said.

The suspect initially made the threat at McDonald's before heading toward Walmart. Police officers responded to the scene within 5 minutes, spotted the suspect who was trying to run away, and tackled him, Cristiani said.

The man, identified only as an adult male upon arrest, was not speaking to police after his arrest and did not have an ID on him, Cristiani said. Police were waiting to complete fingerprints to identify him. No one was injured, he added.

A threat like this occurs about once a year, but it's rare to actually have an in-person suspect and bag as in this case.

The suspect could be charged with making a false bomb threat, which is a felony, and terroristic threatening.