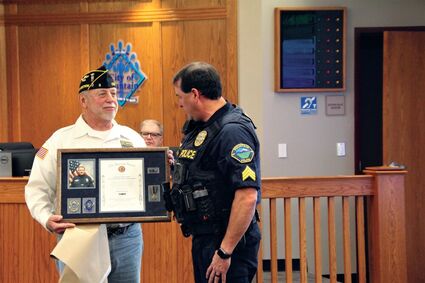 Al Lender of the American Legion Post 5 in Colorado Springs presents a Medal of Merit to Fountain Police Sgt. Galen Steele during the May 24 City Council meeting.

As the entire state deals with high fire danger, the city of Fountain is adding a new section to its Municipal Code to better define and enforce its fire restrictions – and ensure that violations are punished.

The City Council on May 24 approved on first reading an ordinance adding the new section, which addresses pre-existing rules on what is allowed and what is prohibited under State 1 and Stage 2 Burn Restrictions. The code would more explicitly outline various fire activities and prohibitions, and provide for fines of at least $250 for violations.

Adding these rules to the code would "codify and enforce our fire restrictions," City Attorney Troy Johnson said.

Fire Marshal Michael Gates added, "Right now we don't have anything outside of Fire Code to enforce it."

A second reading at the next meeting is expected to finalize the ordinance, as it passed 7-0 on first.

During the discussion, officials noted that the Stage 2 Burn Restrictions in place since May 16 in Fountain and throughout El Paso County likely would not be lifted right away, despite the recent snowfall, because it is not enough to change the underlying conditions. These restrictions prohibit fireworks. Conditions would need to change significantly for fireworks to be allowed by July 4.

In addition, they clarified that a violation under city code, such as use of charcoal grill during Stage 2 restrictions, that leads to a fire could quickly be upgraded to a felony because then it's classified as arson and the state statutes come into play. In that case, much more serious punishments would apply.

Currently, Fountain permits electric pellet smokers in Stage 2, but El Paso County and Colorado Springs do not. Gates said the city is still looking into that part.

The ordinance also prohibits trash burning, and gives the fire chief the authority to declare an open fire ban whenever he deems it necessary.

In other business, the council approved on second reading an ordinance establishing Transportation Impact Fees that would be owed the city for new construction.

The fees would go toward future transportation infrastructure identified in the city's Transportation Master Plan, not to fix existing roads.

In other business, the council authorized the consolidation of two part-time positions in Neighborhood Services to one full-time code enforcement officer job in an effort to better recruit for and fill the slot. The city has been unable to fill three part-time jobs, leaving the department short-handed.

The council also approved amendments to the 2022 budget due to additional expenditures and additional revenue received.

"The good news is that most of the money we're asking for is in the form of grants," city Finance Director John Lewis said.

Some of the projects covered in the amendments include repeaters for SRO radios inside schools, with more than half the cost covered by Fountain-Fort Carson School District 8; and design work for improvements to the Carson Boulevard/Hwy. 85 intersection. 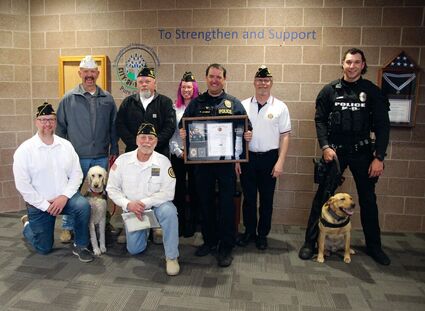 Members of the Americal Legion from the state level and Post 5 pose with Sgt. Galen Steele of the Fountain Police Department, center, and Officer Brett Rider and K-9 Goose on May 24 after presenting Steele with a Medal of Merit, along with a $750 donation to FPD for its K-9 program in Steele's honor.

Deputy City Manager Todd Evans credited City Engineer Brandy Williams with working hard to find funding for the project, as the city was told two years ago that no money for this was available. However, due to the closure of Southmoor Drive when erosion of the creekbank got dangerously close to the road, the safety aspect of this corridor qualified the nearby Carson/85 intersection for a special pot of money at the Colorado Department of Transportation (CDOT) specifically set aside for safety issues.

Designs are still very preliminary and are being submitted to CDOT, which will then provide further design before moving forward with any concrete plans.

Also at the May 24 meeting, one longtime Fountain police officer received special recognition. Members of the American Legion Post 5 and statewide presented Sgt. Galen Steele with the Medal of Merit. They also presented a check for $750 to the FPD K9 program in honor of Steele.

"He has personally tackled multiple issues throughout the city," a statement read. "Some of these include renovations at intersections to make them safer for both motorists and pedestrians. Sgt. Steele also worked tirelessly with both District 8 and District 3 Schools to ensure the safety of their students through signage and marking school zones."