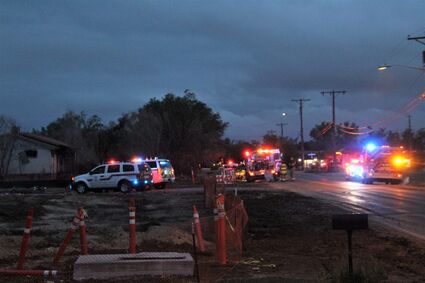 Fountain Mesa Road was closed for a few hours while firefighters doused a fire at an abandoned house near Comanche Village Drive on June 1.

Two fires at an abandoned house east of Fountain Mesa Road and Comanche Village Drive - one May 29, the other June 1 - are being considered arson.

"We are definitely treating both fires as arson," Fountain Police Commander Mark Cristiani said on Thursday. "Witnesses from [Wednesday's] fire saw two juveniles running from the area after they saw smoke."

Another fire believed to have been started by juveniles occurred May 15 at Fountain Mesa Park.

"While we believe the kids were identified and spoken to, we were unable to confirm they set the fire," Cristiani said. "We just didn't have enough evidence to file charges, although parents were advised of the situation."

In that instance, nearby park-goers and residents noticed what was happening and started a bucket brigade to put out the flames. 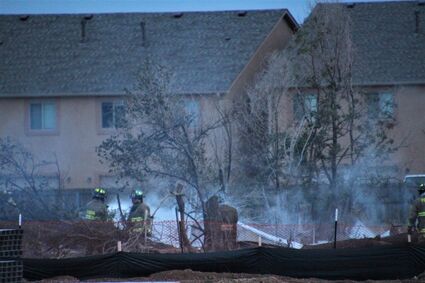 Peg Mesco said her grandson, Shawn Mesco, and his friend, Alston Putnam, were playing football in the field when they saw the smoke.

"They both went running towards it, and one of the houses above the location was already coming out of their house with empty buckets," she said."The boys began filling the buckets from the outdoor spigot and running down the hill to toss it on the fire. They did this about eight times and had the fire almost out when the fire department arrived. It took big hearts (and guts) for two 15-year-old boys who could have put their lives in jeopardy, as well as their health."

The proud grandmother noted that Shawn has severe asthma but refused treatment stating, "My mom will bring my inhaler."