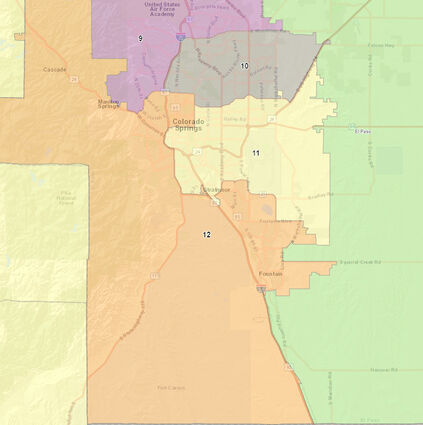 The new State Senate Districts 11 and 12 cover most of the Fountain Valley. To find your district, enter your address at visit https://leg.colorado.gov/house-district-map

By now most registered voters in El Paso County should have received their ballots for the June 28 Primary Election.

For long-time residents, there are some changes in districts worth noting. This is due to the statewide redistricting that took place last year.

In the Fountain Valley area, the most significant change is that State Senator Dennis Hisey – a Republican who has represented District 2 covering portions of Clear Creek, El Paso, Fremont, Park and Teller counties since January 2019 -- will be running for re-election in District 11 due to the redrawn maps.

District 2 will cover a significantly different area. The old SD2 was parceled out to several other districts, and a newly created district in northeast Douglas County is the new SD2.

Hisey said he moved to the Cuchares Ranch neighborhood (near Drennan and Marksheffel roads) last October. His new address is in the newly formed District 11.

"After redistricting, SD 11 is a very competitive seat so while I do not have a primary I have been working hard toward the general election in November," Hisey said. "I am very familiar with the southern portion of SD 11 since I represented it as a county commissioner and have been out walking the district ever since the session was completed last month."

He said the changes seem logical.

Two Democrats are vying for the District 11 seat in the primary: Tony Exum and Yolanda L. Avila.

Also on the Primary ballot are Democrats David Torres and Michael C. Columbe. They are running for the U.S. Congress District 5 seat currently held by Republican Doug Lamborn.

On the Republican side, four candidates appear on the Primary ballot for this position, including incumbent Lamborn. His challengers are Dave Williams, Rebecca Keltie and Andrew Heaton.

Another seat contested among Republicans is that of State House District 21, held by Mary Bradfield. She's running for re-election and faces opposition from Karl O'Brian Dent Sr., who previously ran a brief campaign for sheriff but dropped out of that race.

Other contested Primary races include:

To find your district for State House or State Senate, visit https://leg.colorado.gov/house-district-map

Beginning Monday, June 6, 2022, the VSPC location below is open the following days and hours:

The VSPC locations below are open the following days and hours:

The VSPC locations below are open the following days and hours: