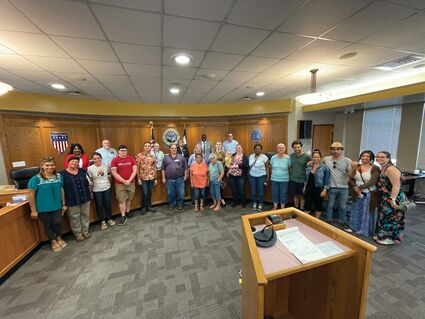 These are just a few of the people who attended the Fountain City Council meeting on June 14 to show support for a new grocery store in the downtown area. The group has collected 646 signatures in support of this idea over the last several weeks. The signatures were turned in to the council.

An elderly couple in their 90s drives from their home in the Olde Town Fountain area up Hwy. 85-87 to Walmart for groceries every week, despite consensus of neighbors that it was not safe for them to do so.

This example was just one of several presented by a large group at the June 14 Fountain City Council meeting to show support for development of a new grocery store in the downtown area.

Participants in a group called Let Everyone Access Fresh Food, or LEAFF, submitted 646 signatures that they had collected from area residents in support of the idea that this part of town needs a grocery...