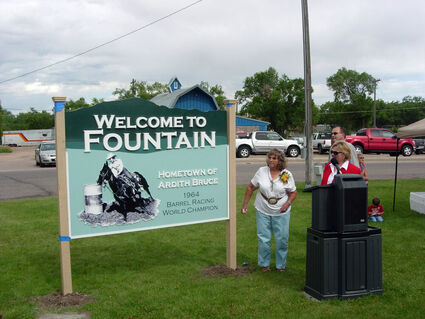 PHOTO COURTESY OF THE BRUCE FAMILY AND THE WPRA

Upon hearing of Ardith's passing, Fountain Valley News Assistant Manager Patricia St. Louis (who served as Managing Editor of this newspaper previously), said she had known Ardith for most of her 40-plus years with the paper.

"This is such a huge loss for our community," St. Louis said. "If you didn't know Ardith, she was a world champion barrel racer and there is a sign honoring her at the entrance to Fountain from Exit 128 off I-25. But she was so much more... a beloved community member who gave of her time and talents in so many ways over decades."

"A local legend and true cowgirl, she left her "bootprints" all over Fountain, especially with the Fountain Riding and Roping Club and the arena at Metcalfe Park," she continued. "She was a community leader and wasn't afraid to speak out on behalf of local residents at many a city council meeting. I always admired her tenacity and her incredible heart. She was a strong and vibrant lady, serving as a role model to young women. Happy trails to her. She will be sadly missed and fondly remembered."

Inspiring a young horsewoman who would grow up and meet her...

This newspaper's General Manager Karen AuBuchon Johnson, also an equestrienne, said when she was a youngster she had a paperback book about how to train your horse to do barrel racing, and one of the authors was Ardith Bruce.

"What a surprise it was to eventually meet her years later and see her at local equestrian events," she said.

When the trailbridge near the Hanson Nature Park in Fountain was dedicated in memory of the late Carl H. Wiese (co-founder of this newspaper and stepfather to Johnson and St. Louis) in the late 1990s, Ardith and another local horsewoman, Jo Soltwedel, rode alongside Johnson and her husband, Ben, on horseback, in tribute to Wiese. He and his wife, Katty, had enjoyed riding the trails along Fountain Creek for many years, as did Ardith and Jo, too.

She was a trail blazer... what a life!

Long-time Fountain resident and leader Fran Carrick who was instrumental in getting the tribute sign placed at the southern entrance to Fountain said, "Ardith was one of a kind. Trail blazers are. She had forgotten more about barrel racing that most even know. She was quick with numbers and times and could have them figured up before the adding machine did. She touched thousands. I remember she was so proud to tell anyone that she was from Fountain. Not Colorado Springs, but Fountain, CO."

She continued, "She not only knew barrel racing, she knew barrel ground- how it needed to be worked and watered. She was a master at barrel ground. She and my husband, Floyd, worked side by side to get the ground at the arena perfect for a barrel race."

Carrick said Ardith (who was her next-door neighbor for 20 years) had served on the El Paso County Parks Advisory Board and had a keen interest in how parks were planned and cared for. She was involved in so many community efforts, she had such a heart for our city."

She concluded, "The best thing about Ardie was she got to do everything she ever wanted to do. What a life!"

She was famous nationwide and also in Fountain.

Former long-time El Paso County Commissioner and past Mayor of Fountain Jeri C. Howells recalled the first time she heard about Ardith Bruce. She said it would have been in the 1960s after she moved to Fountain. But oddly, it was on a TV show called "What's My Line" that she first learned of Mrs. Bruce.

"I was watching the show, on which celebrities tried to guess the identity of mystery guests. She said they weren't able to guess who she was, but her line was that she was a barrel racer from Fountain, Colorado who had just won the world championship."

Howells said, "She was amazing, and outstanding world-wide champion."

Over time she got to know Ardith better and admired her more and more. She said one special memory was attending a dinner at Broadmoor where Ardith and others involved with rodeo events were being honored.

"As the commissioner representing the Fountain Valley, I had the pleasure of sitting at Ardith's table," she shared. "It made me proud that both of us were from Fountain."

She concluded, "She was famous throughout the nation and famous in the city of Fountain as one who spoke up and cared about the community and joined a lot of activities."

Kent Sturman, director of the ProRodeo Hall of Fame and Museum of the American Cowboy, acknowledged the impact Ardith had on the profession and the community.

"She was a great champion barrel racer and an even greater woman," Sturman said. "She will be missed."