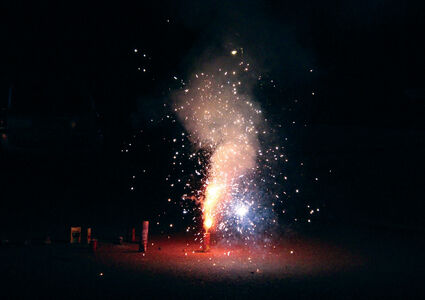 Fireworks in Colorado, regardless of jurisdiction, must meet certain legality requirements. A major factor is that they cannot leave the ground.

Fireworks – only ones that are legal in Colorado, meaning they don't leave the ground – are now allowed in Fountain and unincorporated communities such as Security and Widefield.

Last week an El Paso County official declared that the county's ban on fireworks in unincorporated areas did not comply with state statutes and, therefore, does not exist.

Shortly thereafter, local fireworks stands requested their permits and started setting up shop. In Security, there is one at the southwest corner of Main Street and Bradley Road (Big Daddy Fireworks, 1880 Main St.).

Long-time favorite Collins Fireworks is celebrating 75 years of serving the region. Their stand is at Palmer Park and Powers Blvd. in Colorado Springs. (See ads in this issue for both fireworks stands).

The development came about during a discussion about an ordinance being considered by the El Paso County Board of County Commissioners that officials say would bring the county into compliance with state law and clarify issues pertaining to fire bans locally.

Regarding fireworks, Interim County Attorney Steve Klaffky said the law specifies that even when the county is in Stage 1 or Stage 2 fire restrictions, legal fireworks are still allowed unless the county commissioners specifically adopt a resolution stating otherwise.

In this case, the BOCC did not do that.

"Ergo, there is no ban on the use or sale of legal fireworks in the unincorporated parts of El Paso County as of today," he said June 21.

In Fountain, officials announced Tuesday, June 27, that the Stage 1 fire restrictions had been lifted, effective immediately. Without such restrictions, fireworks usually are permitted in Fountain from May 31-July 6.

Despite the sudden lack of a fireworks ban at the county level, officials urged residents to check with their fire districts about any regulations in place there because each fire district may set its own parameters for fireworks.

In Security, the fire department said fireworks are allowed.

"We will be following El Paso County restrictions/guidelines for fireworks," Security Fire Inspector Alex Martin said. "The only exception would be if a red flag day is declared, then no fireworks will be permitted."

Martin urged caution in any situation as people celebrate with fireworks.

"We would like to remind our residents to practice safe firework use with an emphasis on sparklers," Martin said. "Sparklers are made from a mixture of chemicals including aluminum or magnesium. Many common firework injuries occur when people hold sparklers directly upright while lit. The aluminum/magnesium can fall from the sparkler while still burning and onto people's hands/skin. The phosphorous then continues to burn until it has all been consumed and can cause terrible burn injuries. Always hold sparklers horizontally and try to avoid holding them over any part of your body or over combustibles of any kind."

Another easy piece of advice?

"Always remember to keep an active water source close by during all fireworks activities," Martin said.

The state statute that caused the sudden change in the county does not apply to Fountain.

"We as a municipality have the authority to enforce stricter rules over the state statutes," Fountain Fire Investigator Michael Gates said. "The county can only enforce Fire Restrictions in unincorporated areas of the county. As we have our own ordinances and also our city has its own Law Enforcement, we having the Home Rule can enforce our local laws."

The city opted to lift its restrictions after recent rains and consultation with experts.

"With the recent moisture and the upcoming moisture, we are going to remove all restrictions," Gates said. "The Forest Service lifted theirs last week. The County, being as large as it is and covers everywhere from the forest on the North and the West, also the plains to the South and the East. The Fuel Moistures were about moderate concerns prior to the rains we received and are predicted to get. Hopefully we can stay out of restrictions for a few weeks."

Fountain Public Safety Information Officer Lisa Schneider said the city "will continue to monitor weather and fire danger conditions throughout the next few weeks, and we may enact restrictions as needed in the weeks to come. The City of Fountain has received a good amount of moisture in the last week and more to come late this week. We have been fortunate compared to our neighbors in the county, who have not received as much. Please understand with the lift of restrictions, the sale and use of fireworks is permitted. Any fireworks that leave the ground are still illegal and there are no sales of that kind within the state."

The city has been encouraging residents to report use of illegal fireworks. There are certain varieties that are illegal in Colorado at all times, including:

• Firecrackers of any type 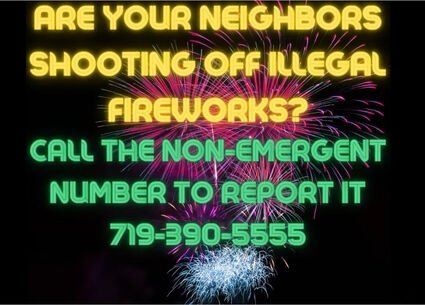 The city of Fountain encourages residents to report use of illegal fireworks, such as the ones that leave the ground. Fireworks sold by local vendors who obtained permits are legal.

Fountain officials urge residents to report use of illegal fireworks. When possible, please provide a specific address for where the fireworks are being shot off from so officers or firefighters can locate the source. Call (719) 390-5555. If you provide only a general area, it is much harder for them to locate.

Other fireworks that are legal in the state include: