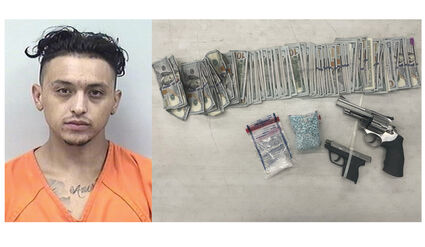 Troy McKibben and the stash of cash, guns and drugs police say they found in his possession on July 6.

A man found in possession of suspected fentanyl, meth, handguns, a stolen car and a large amount of cash was arrested in Fountain on Wednesday morning.

At approximately 10:15 a.m., officers with the Fountain Police Department, along with its DICE Team, attempted to contact three individuals sitting in a stolen motor vehicle in the area of Royalty Place and Windsor Lane. Upon contact, the vehicle attempted to flee, intentionally striking patrol cars, an FPD report said. The driver began ingesting what appeared to be fentanyl pills while ignoring officers' commands. Officers were able to block the vehicle in and take the driver and two passengers into custody.

The male passenger, identified as 39-year-old Jason Crumpler, was booked into CJC on warrants for Traffic Offenses, Kidnaping, Shoplifting and Eluding an Officer.

The adult female passenger was released due to having non-extraditable misdemeanor warrants.

All three parties were from the western slope of Colorado (Delta, Montrose and Grand Junction area).