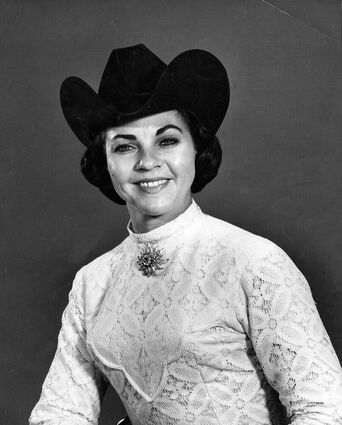 Ardith Elaine Bruce departed this life on June 27, 2022, to join her beloved husband Jim and her son Dan.

Born to Forest and Evelyn Barnes on July 22, 1931, at their home near Clay Center, Kansas, she made their family complete joining her brother Raymond and sister Ruth. When Ardith was young, the family relocated to a farm outside of Mountain Grove, Missouri. She attended a small two-room schoolhouse to which she walked 2 miles "uphill both ways" or she rode her pony, Fairy. While attending Mountain Grove High School, Ardith was very active in school activities including band and National Honor Society. She graduated in May 1949.

Before graduating, she went to visit her sister Ruth and brother-in-law, Chet. Chet's brother, Jim, just so happened to be visiting as well. It was love at first sight, and brothers married sisters. Ardith and Jim were married March 19, 1949, in Mountain Home, Arkansas. Their love story lasted nearly 60 years.

Shortly after graduation, the couple moved to Muleshoe, Texas. Jim worked as a ranch hand and Ardith worked at the post office. This is when the fire was lit for her love of barrel racing. Jim took Ardith to her first rodeo, and she won first place both days and pocketed $30. From then on, she was hooked. The family jokes that was probably a decision Jim regretted for the rest of his life.

A year or two later the couple moved to Woodland Park, Colorado, and on October 10, 1953, they welcomed their only child, Steven Daniel Bruce. In 1959, they moved to their final and forever home in Fountain, Colorado.

Ardith worked many jobs in addition to barrel racing. She was a bookkeeper, worked deep inside Cheyenne Mountain for the top-secret base, NORAD. Barrel racing and horses always remained her passion. She qualified for the National Finals Rodeo seven times from 1963-1969 and won the Girls Rodeo Association World Championship in 1964. She still holds a record for winning Pikes Peak or Bust Rodeo seven times. She was the first woman to receive a license on a recognized horse racing track and served as an outrider. She conducted barrel racing clinics in 20 states, including Hawaii. While at a clinic in Rapid City, South Dakota, she met and brought home one of her students, Debbie Weaver, who became part of the family and lived with them until she graduated high school.

Ardith's accolades did not end there. She became the first barrel racer to be inducted into the Pikes Peak or Bust Rodeo Hall of Fame, the 1976 GRA World Champion in steer undecorating, and last but not least at age 90 was selected for induction into the Pro Rodeo Hall of Fame in Colorado Springs, Colorado. She will be inducted posthumously during the official ceremony on July 16, 2022. She served many years in various positions in the GRA, WPRA, El Paso County Parks Advisory Board, and was a charter member of the Fountain Riding and Roping Club.

She loved her garden, flowers, sewing, cats, and talking on the phone. She doted on her great-grandchildren and would show pictures of them to anyone who would look. Ardith packed three lifetimes worth of experience in her 90 years. She never met a stranger, and she will never be forgotten.