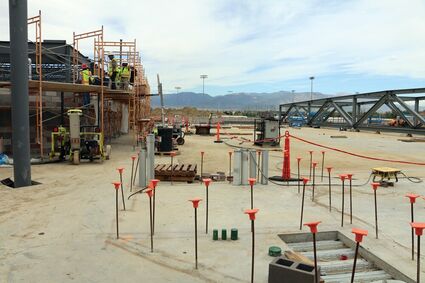 Progress is being made on Fountain-Fort Carson School District 8's newest facility, the Trojan Arena, which will expand the district's academic programs and indoor athletic and event capacity. The foundation has been laid, which included drilling eight miles worth of holes that were filled with concrete. Neighbors and passers-by may also notice that some of the exterior walls are going up.

The arena will be located off Jimmy Camp Road in Fountain (with an official address on the new street "Trojan Point" south of the district's administration building), behind and east of the District's Administration Office and the FFCHS ball fields.

FFC8 Director of Facilities and Construction Adrian May stated, "Due to the growth in Fountain-Fort Carson School District, space for extra-curricular activities has become more challenging and has forced the facilities team to become creative in ensuring all activities and athletic events have equitable access. The arena will increase the availability of quality spaces for students to participate in the activities and athletics they are passionate about."

Interest and performance in indoor sports teams continues to increase in the district. The arena will help account for growth as well as improve the time students are returning home after school due to the increased capacity. FFCHS girls' volleyball and boys' wrestling teams have increased in participation over the last few years. Both sports have also added teams with the addition of boys' volleyball and girls' wrestling. Boys' and girls' basketball have also both seen increases in participation recently.

The new Trojan arena will also allow the district to host 5A tournaments. FFCHS has competed at 5A-level high school athletics in court sports since 2008. Over the years, the Trojan men's and women's basketball have earned their place in the playoffs multiple times, securing their spot well ahead of the end of the season. However, the main gym at the school does not have the capacity to host CHSAA-sanctioned tournaments or playoff basketball games.

"This arena sets up the school district, and FFCHS, for decades of high caliber athletic and academic opportunities," said Jared Felice, FFC8 and FFCHS Athletic Director.

The arena will be able to seat over 4,000 people, increasing to 5,000 when using the floor space. This will allow the district to hold big events indoors, like graduation.

The arena will have two public levels. The main level features the main basketball court, which will be able to split into four different courts for tournaments. The main floor will also have four locker rooms, a training room, bathroom, coaches' offices and a conference room. Concessions and the Trojan Store will be on the concourse to welcome guests.

The top level will have an equipment/ aerobics room. A walking/running track will wrap around the perimeter of that level. There will also be a multipurpose room with windows to look down on the courts. These resources will be utilized for many staff wellness programs and other special events. 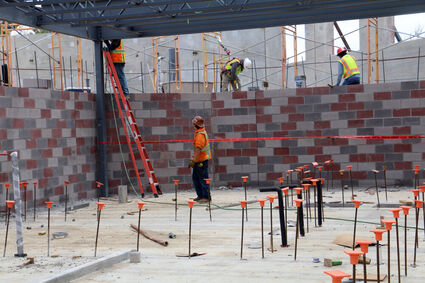 Underneath it all is the basement. This area will be used to store and maintain equipment.

The district is excited to bring a world-class venue like this to the Fountain and Fort Carson communities to elevate everyone's level of work and play.

May says the project is about 18 percent complete. He says the entire perimeter of the building should be up by late fall and the roof added before the winter.

The arena construction is on time and on budget, and expected to be completed in the fourth quarter in 2023.

Sports fans and community members can follow along with progress of the arena at https://fountainfortcarsonhs.rschoolteams.com/ or the district and athletic social media (district is @FFC8schools and athletics is @FFCHSathletics).