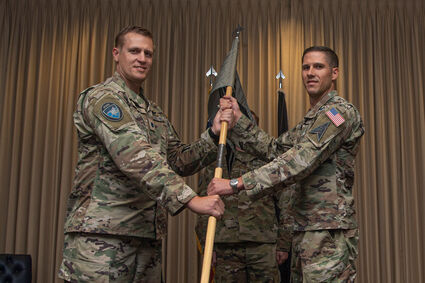 The 18th Space Defense Squadron Detachment 1 was activated during an assumption of command ceremony at Schriever Space Force Base on July 14.

"Capabilities delivered from space are foundational to the American way of life and are vital to U.S. combat power," said Glandon. "Like all other domains, space is not a sanctuary from attack and space systems are potential targets. Det 1 will provide Space Domain Awareness for on-orbit threats in order to protect and defend critical U.S. and Allied space capabilities throughout the continuum of conflict."

The JTF-SD, and its NSDC, provide unprecedented unity of effort with the Department of Defense, Intel Community and National Reconnaissance Office to protect and defend against threats in the space domain. Through this partnering, the JTF-SD brings to bear the full force of the U.S. Government and synchronizes space superiority planning and operations.

"As China and Russia continue to make the space environment more perilous, it is critical that the U.S. transitions its Space Domain Awareness from cataloging to custody," said U.S. Army Maj. Gen. Tom James, JTF-SD commander. "Having the 18 SDS Detachment co-located with us at JTF-SD will cement that partnership and enable the U.S. to effectively and responsively defend our space capabilities."

In unified action with mission partners, the 18 SDS Det. 1 will deliver a timely and threat-focused understanding of the space situation in direct support of the JTF-SD protect and defend mission. Det 1 will provide a 24/7 crew force to perform SDA functions on NSDC designated objects of interest.

"The 18 SDS, and now its detachment, will remain U.S. Space Command's key provider of space domain awareness," said U.S. Space Force Lt. Col. Matthew Lintker, 18 SDS commander, who also presided over the ceremony and the presentation of the new guidon. "SDA is foundational to all space operations and underpins the overall strength of our joint force, and moving forward, SDA operations must prioritize understanding, articulating, and responding to the risk posed by an adversarial threat."

In April 2022, the squadron, formerly known as the 18th Space Control Squadron, was re-designated as the 18 SDS to signify increased focus on space domain awareness, command and control, integrating and synchronizing SDA capabilities in support of the contested and congested domain, and collaboration with allies and partners.

The 18 SDS, located at Vandenberg SFB, California, provides the nation and its allies frontline defense of the space domain. With the establishment of the U.S. Space Force, 18 SDS is administratively aligned under Space Delta 2.