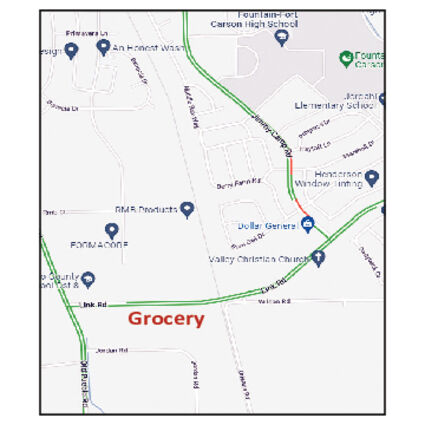 Community advocate Fran Carrick didn't give up the fight to bring a grocery store to Fountain and is thrilled that LaGree's will be building a store near Countryside.

A new grocery store for Fountain appears to be on the horizon now that owners of LaGree's Food Stores have agreed to purchase land near the corner of Old Pueblo Road and Link Road.

LaGree's and Fountain Sanitation District (FSD) inked a deal for a 14.7-acre lot next to the FSD offices on Link Road during the district's July 13 board meeting.

The lot was one of the leftover pieces of land no longer needed after FSD built its new administration building, which was completed in 2020, FSD General Manager Jim Heckman explained. The lot extends from Link Road on the north, to Jordan Road on the south, and Orleans Road on the east.

It is situated slightly south of Ventana, and near the Countryside neighborhoods.

Long-time Fountain resident and community advocate Fran Carrick said she is thrilled that LaGree's will be opening a store in Fountain. She has long wanted to see more businesses as well as recreational opportunities for local citizens. She previously served on the Fountain Park and Recreation Advisory Board and was instrumental in getting the Splash Pad built at Aga Park. She continues to push for a swimming pool for the community, too.

Carrick often attends City Council meetings and on many occasions has stressed how much Fountain needs to market itself to attract new businesses, and also to maintain or keep the ones we have here.

She provided details about her involvement with LaGree's choosing to come to Fountain after a previous attempt by Fountain's Urban Renewal Authority failed. FURA had hoped to get the Colorado-owned chain to build a grocery store on S. Santa Fe, just south of the Fountain Post Office.

"I didn't even know what grocery store was supposed to be coming to Fountain, just all of a sudden it wasn't," she said. In conversation with her friend, whose family owns Thaxton's Market in Las Animas, it was suggested that she contact a grocer with experience, like Mr. Orin LaGree. His family owned and operated Canon Market in Canon City for years. He grew up there.

Max Kronstadt of the Colorado Trust was active in Fountain gathering input regarding local needs and what the community wished to have. Carrick got involved with his efforts and sat with him at a booth at the Fountain Valley Chamber of Commerce's Fall Festival two years ago seeking public engagement and input.

"A family came by and mentioned we should try to get a LaGree's store," she shared. After this she contacted Mr. LaGree, who informed her he had tried to get something going in Fountain but it didn't work out.

Carrick said she subsequently called and chatted with him a few times, and learned that from the time he pulled out of building a store in Fountain, to when she spoke with him, he had already opened two new stores in Colorado – one in Buena Vista, the other in Poncha Springs.

"I asked if he would be willing to reconsider opening a grocery store in Fountain; he agreed to talk about it. I then invited [City Manager] Scott Trainor to drive to Pueblo, meet Mr. LaGree, and tour his store.

Over the next few months, Carrick stayed in touch with Mr. LaGree while Colorado Trust got citizens involved and formed LEAFF – Let Everyone Access Fresh Food. Economic development staff suggested members of LEAFF obtain signatures to present to city council regarding "hot spots" and where a grocer might be needed and to indicate how very much they wanted to have a grocery store in the south part of Fountain, which had been identified as a "food desert." Recently, they gathered more than 600 signatures from area residents in support of the campaign.

Feeling like nothing was really changing, Carrick asked Mr. LaGree for another meeting and she invited Deputy City Manager Todd Evans to go with her. His reply was "let's go," she said. So they took a day to travel to see Mr. LaGree at his new store in Poncha Springs. She and Evans were very impressed with the layout, cleanliness and attitude of his staff.  After that meeting went well, Mr. LaGree came to Fountain; Carrick and Evans took half a day driving him around to show him possible locations for a store, "and things were set in motion."

When they showed him the location next to the Fountain Sanitation District's offices near the corner of Link Road and Old Pueblo Road, she said he was very interested.

Carrick said that after news of last week's Fountain Sanitation District Board meeting at which the contract to purchase the site for $300,000 was approved, everyone she has spoken with is very excited about it. She is pleased to have been able to be involved and committed to seeing this come to fruition.

She was advised there should be some solid action within about six months.

Brittany Fechko, a resident who has been involved with the grocery store campaign, said this announcement is a major boon to the south side of Fountain.

"I live off Fountain Mesa and Autumn, so 2 miles from the property," she said. "I'm a little disappointed we couldn't find a location off 85/87, but this spot makes more sense in order for LaGree's to really put everything they need in order to serve the community."

She alluded to possible other businesses such as a bakery, hardware store, hair dresser, ice cream shop, or the like that could be added on the same property as the grocery store.

Fechko hasn't given up on the notion of a grocery store in the Olde Town district but noted that it would have to be a smaller business model than the one LaGree's is proposing.

Mr. LaGree was contacted about details for the proposed store, but he declined to divulge specific plans at this time.

Carrick noted that key to the process in this case, and others, is a personal touch.

"Building relationships is so important to every aspect of our lives, particularly when you want to grow a business," she said about the process.

She said she also believes that Fountain needs to be marketed. "Development is going to happen; City Council assured me of that 30 years ago," she said. "So let's help it. More business means more and better tax revenue."

"I'm still disappointed that Old Dominion Trucking left Fountain after having a terminal here for years.  They wanted to build a new, bigger site right here in Fountain. After negotiations for the new site failed, a brand new Old Dominion trucking terminal was built within a year in Colorado Springs.

Her final thoughts: "Fountain needs to do more to market and brand the south end for new business. There is a ton of opportunity for this city."