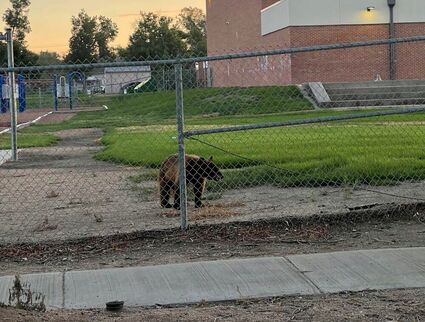 This bear was in the school yard at Aragon Elementary School in Fountain on July 20.

One or more bears have been spotted strolling around the downtown Fountain area recently, a reminder that these animals do exist here in the valley. 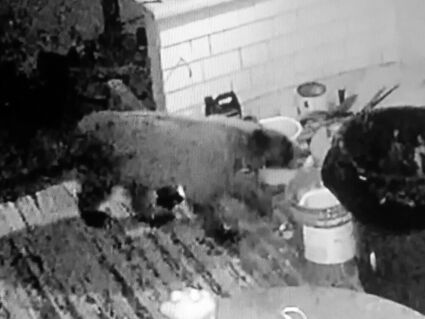 A security camera picked up this bear on the porch of a home on North Main Street at 5:20 a.m. July 20.

A bear cub was caught on a security camera showing it on the porch of a home in the 300 block of North Main Street in Fountain at 5:20 a.m. Wednesday, July 20. Jeffrey Jury said he woke up and opened the window on his front door to let in some air when he realized a bear was just feet away from his front door.

Also Wednesday, Stephen Basham spotted a bear inside the chain link fence at Aragon Elementary School. He stayed inside his truck while snapping a photo.

"It seemed a bit frustrated that it was behind a fence," Basham said. "I feel like it was looking to get out of the fenced area it had found itself in by accident."

He contacted Colorado Parks and Wildlife, who replied that the bear most likely came up from the creek and got itself turned around a bit.

Over the years residents have reported seeing bears in numerous locations in this area, including near the Fountain Library, the neighborhood behind Fountain Middle School, and further east around Kane Road, among others.