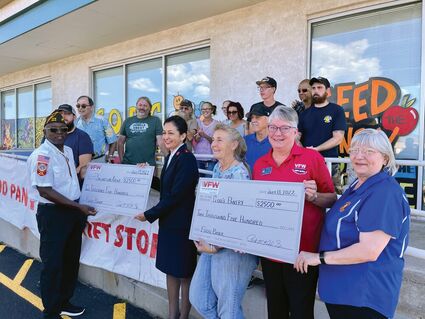 Members of VFW Post 3917 presented God's Pantry and The Salvation Army with checks for $2,500 each on July 13.

"The opportunity for the Veterans of Foreign Wars to help our community partners is a blessing," Post Commander Jerry Bryant said.

Trust and reliability, earned respect in the community - that is what religious, charitable, labor, fraternal, educational, volunteer firefighters, or veterans' organizations have brought over the years, Bryant explained.

"Communities within Colorado benefit from the operation of nonprofits each day," he said. "In many locations around Colorado, nonprofits are the sole community asset that is the anchor of the population that enhance the economic, social programs, the unique spirit, and cultural well-being of their respective communities." 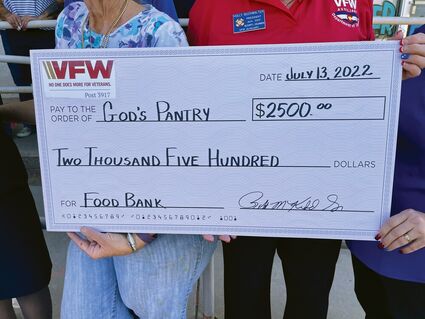 The donation event was held at God's Pantry, 30 Widefield Blvd.

The Veterans of Foreign Wars of the U.S. is a nonprofit veteran's service organization comprised of eligible veterans and military service members from the active, Guard and Reserve forces who served in combat zones. Founded in 1899 right here in Colorado and chartered by Congress in 1936, the VFW is the nation's largest organization of war veterans and its oldest major veteran's organization. With 23 thousand VFW and Auxiliary members in Colorado and nearly 1.5 million located in more than 6,000 Posts worldwide, the group's slogan is "no one does more for veterans." The VFW and its Auxiliaries are dedicated to veterans' service, legislative advocacy, and military and community service programs.