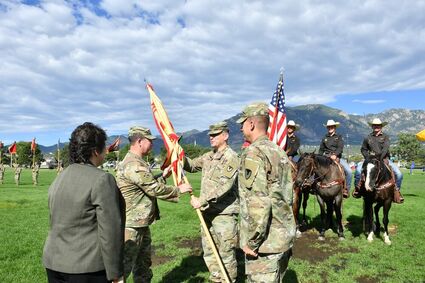 Brown comes to the Mountain Post from Camp Dodge, Iowa, where he served as the command inspector general for the Iowa National Guard.

"The garrison command mission is to take care of Soldiers and Families and ensure that the units here at Fort Carson have the resources and facilities they need to fight and win our nation's wars," said Brown. "For the past 23 years I've been on the receiving end of that. I've had support from garrison teams, and now it's finally my turn to give back to the Army Soldiers and Families who have given so much to me. I'm really excited for this opportunity to lead the garrison team."

Brown spent much of his career with the 101st Airborne Division at Fort Campbell, Kentucky. He has deployed multiple times to Iraq and Afghanistan, first as a troop commander and later as a battalion commander and brigade executive officer. He holds master's degrees in leadership, management and defense studies from the National University of Ireland and in strategic studies from the Army War College.

Among his many awards, he's earned the Bronze Star and Defense Meritorious Service medals.

Springer assumed command of the garrison in July 2020.

McCullough spoke about many of Springer's achievements during his time as garrison commander. She mentioned his leadership of the garrison through multiple brigade deployments while he balanced critical fiscal and resourcing challenges. Next, she highlighted how he also managed a budget of over $250 million and provided leadership and support for tens of thousands of service members and civilians.

"While the COVID-19 pandemic began to deeply root itself across our nation, Springer expertly led, implemented and managed COVID-19 safety protocols ... and he built strong relationships with local, state- and federal-level representatives," said McCullough. "Because of his leadership, the 4th Infantry Division and the garrison maintained a heightened level of readiness in the face of a global pandemic unseen since the flu of 1918. Throughout it all, Col. Springer was a patient and professional leader who handled considerable pressure with a level of readiness that would make any senior leader proud."

After 23 years of Army service, Springer is retiring from active duty, but will remain in the Pikes Peak Region and assume the role of CEO of Care and Share Food Bank for Southern Colorado.

"What an honor it was to command the Fort Carson garrison .... It's been a fantastic two years," Springer said. "We have 72,000 Soldiers, Family members and civilians who make this the 'Best Hometown in the Army.' I've been all over the U.S. and Europe and there is just a real big difference with this community here. It's unlike anything I've seen as I moved every two years from installation to installation. I'm really happy to be part of the community now and also to give back to our Soldiers and Families."