Boy recognized as a hero for actions during a crisis 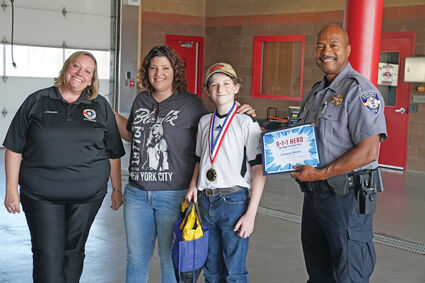 The quick actions and calm thinking of Jackson Nixon, 12, helped save his and his mother's life when the accelerator in the car she was driving stuck, keeping the car moving between 65 to 75 mph on southbound I-25 in Fountain.

The frightening incident happened on June 9.

Jocelyn Darbyshire, a 9-1-1 dispatcher, received a call from Jackson shortly before their car passed Mesa Ridge Parkway as they were traveling southbound. She said she was on the phone with Jackson for seven minutes and the car traveled over 4 miles down I-25 before the harrowing ordeal ended.

Darbyshire worked with Jackson to determine their exact location on I-25. Fire, medical and police responders from the city of Fountain headed in their direction to try to locate them. Jackson provided the vehicle's description and gave updated locations and speeds of travel.

Lacey said that the brakes were completely out, and the car was continuing to randomly accelerate. She was dodging traffic through semi-trucks in a construction zone. They had already turned on their flashing hazard lights to alert other drivers to their predicament.

Jackson advised Jocelyn he was moving to the back seat of the car and buckling up in case of a crash. Although the situation was dire, Jackson remained calm and articulate, officials explained.

Using the "stuck accelerator" instructions in the Emergency Medical Dispatch protocol, he worked with Darbyshire to relay instructions to Lacey and they got the engine turned off and the car slowed. They exited the highway into a ditch along I-25, narrowly missing a crash with other vehicles, and came to rest on all four wheels without rolling.

However, the vehicle's engine compartment then caught fire and Jackson and Lacey quickly escaped. Fast-moving emergency responders arrived on scene just a few moments later, putting the fire out and ensuring that Jackson and Lacey were unharmed.

"This was the best ending that could have happened," said Darbyshire.

Lacey said witnessing her son's bravery was a sight to behold.

"I don't think we would have made it if it hadn't been for Jackson's calm thinking," she said. "A lot of things could have gone wrong."

Lacey said Jackson's only experience operating a car until then was through playing video games. She also mentioned how she and her husband, Tyson, had just purchased this vehicle, a 2006 Ford Freestyle, to replace their other Ford Freestyle as it was great for transporting their six kids around. They only had liability car insurance, and according to Colorado's Lemon Law they were unable to do anything about the faulty car.

On July 21, Jackson was surprised with a ceremony in his honor at Fountain Fire Station No. 1. He was reunited with Darbyshire and many other first responders who played a role in the emergency. He also received a 911 Hero Award and was able to enjoy a ride in a fire truck. Jackson reported that he hopes to be a firefighter someday. 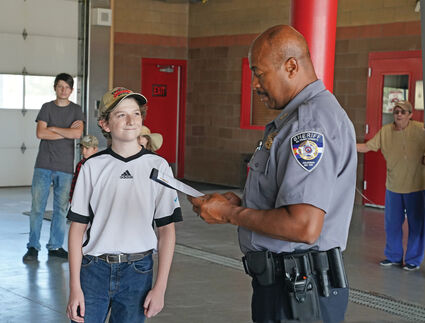 Chief Clif Northam from the Administrative Management Bureau of the El Paso County Sheriff's Office presented Jackson Nixon with a 9-1-1 certificate, medal and other awards.

"We are immensely proud of Jackson for his quick thinking and composed response during a frightening time," said Clif Northam, chief of the Administrative Management Bureau of the El Paso County Sheriff's Office.

"It is for Jackson's courage and dependability in a crisis that the El Paso County Sheriff's Office and the El Paso Teller 911 Authority present to him this 911 Hero award. Congratulations, Jackson!"