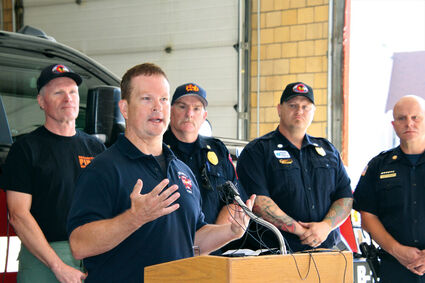 Members of the Southern El Paso County Interagency Partnership Group – known as "The South Group" – joined for the official announcement of the new agency at Security Fire Station 1 on July 21.

"The fire chiefs of the South Group have experienced a substantial increase of wildland fires and wildland urban interface fires in recent years," Stratmoor Hills Fire Chief Shawn P. Bittle explained in a news release. "Collectively they have identified a need for additional wildland fire protection in Southern El Paso County. The need for these additional resources is the driving force in the creation of a newly formed interagency wildland fire team that will provide critical support to their service areas as well as to mutual aid partners."

Known as the Southern Colorado Interagency Wildland Fire Team, or "SOCO," the team will be guided by its superintendent, Shane Coyne, a retired U.S. Air Force lieutenant colonel with more than 23 years in the wildland fire service. This is the fifth group he's been a part of since 1999. He spent much of his prior years with El Paso County Wildland Fire Management, as well as U.S. Forest Service and U.S. Fish and Wildlife. Coyne holds double master's degrees in both Organizational Leadership and Public Administration.

"This newly formed team will consist of highly trained, motivated, and experienced wildland firefighters from across the region," Bittle added. "The 100-percent volunteer workforce will utilize equipment and apparatus from South Group organizations to support current staff. The team will have the ability to more than double the number of wildland firefighters on a typical scene, sometimes within minutes from the initial dispatch of a life-threatening wildfire."

One of those volunteers is David Moravek, who said he first got interested in firefighting years ago during an infamous and deadly fire in Oakland, California. What led him to step up and get involved as a volunteer was a "sense of community," he said. When word of this new group started to spread around southern El Paso County, Moravek was eager to join.

Some team members like Moravek have full-time jobs in other industries but devote their spare time to this effort. Others, like Stratmoor Hills Firefighter Tara Bosch, already live the firefighting life 24/7 and want to add their talents to this endeavor.

"Some of these members are so dedicated that if they see it's a Red Flag Day, they'll take a day off of work to be here," Bittle said.

On those Red Flag Days, extra volunteers and apparatus will be positioned strategically at stations across the SOCO range. They'll be available on other days as well.

"I think the big picture we have to realize is that fire season is all year long," Bittle said.

This group is not related to, nor does it replace, the county's wildland fire team, which operates alongside agencies all over the area. 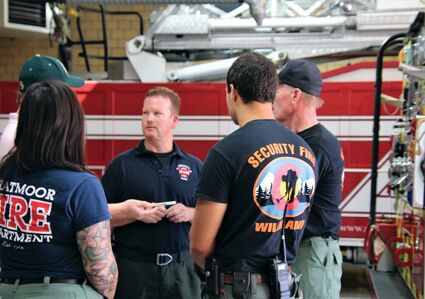 Shane Coyne discusses the SOCO wildland fire team with volunteers and the media.

The new team started planning in January, with an initial deployment in April. They had an immediate impact, as numerous wildfires broke out in the area from April-May. One example of the team's impact was during a fire near Hwy. 85 and South Academy Boulevard the evening of May 12 – after an already long day of fires around the region. Bittle said the fire could have spread quickly into a nearby residential area, but the team's response in addition to the regular crews on duty at the time helped prevent that.

"We had more than double the response of what we usually have," Bittle said.

SOCO is not limited by jurisdictional boundaries, giving these firefighters flexibility to go where they're needed among member agency locations, team member Mike Bukowski said. He added that these volunteers may spend a long time at a wildfire scene to take care of the many tasks needed to ensure it's out, freeing up the on-duty fire department crews to tend to other calls in their jurisdictions.

The team is up to 18 members already, with more being recruited. They go through rigorous training to comply with guidelines from the National Wildland Coordinating Group, NWCG, and ensure they're ready for the many types of wildland fires likely to happen in Colorado.