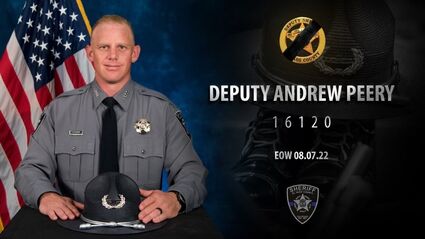 El Paso County Sheriff's Office Deputy Andrew Peery was killed in the line of duty, apparently in connection with the Sunday shooting in Security.

UPDATE Monday, Aug. 8, 11 a.m. -- The Colorado Springs Police Department has confirmed that a woman was found deceased at the scene of Sunday's shooting in the 500 block of Ponderosa Drive in Security. The suspect, John Paz, was later found dead.

"Detectives from the CSPD Homicide/Assault Unit obtained a search warrant for this residence and the CSPD Tactical Enforcement Unit (TEU) subsequently entered the home," a CSPD statement read. "TEU found John Paz deceased inside, due to an apparent self-inflicted gunshot wound. While the El Paso County Coroner's Office will make the official cause and manner of death determinations for all three individuals, the deaths of Deputy Peery and the adult female are being investigated as homicides committed by John Paz."

The EPSO deputy identified as having fired their weapon has been placed on administrative leave per their department policies. No Fountain Police Department or CSPD officers fired a weapon during this incident.

ORIGINAL Story, Aug. 7: The El Paso County Sheriff's Office has confirmed a deputy died as a result of a shooting in Security early Sunday evening.

"It is with a heavy heart that we share Deputy Andrew Peery has been killed in the line of duty," an EPSO statement read. Peery was 39.

EPSO responded to the scene and instructed neighbors in the area of Grand Boulevard and Ponderosa Drive to lock down Sunday evening around 5:30.

Some neighbors have stated that a man went to his former or estranged wife's house and started shooting. One woman said she witnessed the deputy being struck.

Two EPSO deputies and one Fountain Police officer were the first to arrive.

The neighborhood just east of Security Boulevard remained contained by a large law enforcement presence, and the suspect has not yet been apprehended. EPSO identified 33-year-old John Paz as the suspect.

"He is to be considered armed and dangerous," Elder said.

UPDATE 10:40 p.m.: From CSPD: "We can now confirm the scene is secure and there is no longer a threat to the public. This is a very complex investigation and our detectives will be on scene for several hours. Please continue to avoid the area. We will release more information as appropriate."

Although the location or condition of the suspect have not been provided, the statement indicates he may have been apprehended or otherwise deemed no longer a threat.

The condition of others involved in the shooting has not been released.

"Andrew was a highly dedicated, highly decorated SWAT operator for the El Paso County Sheriff's Office, and he has been with my office since 2016," Elder said.

He is survived by his wife and two children.

It is important that we remember the contributions he made to the Police Department and the impact he had on the citizens of Bakersfield and Kern County."

Peery was a veteran of the U.S. Army and an officer with Bakersfield Police Department in California for over two years before joining EPSO.

Security Fire personnel also responded to this incident and transported Peery from the scene.

"We are deeply saddened and broken by this loss," a department statement read. "We mourn with our family at the El Paso County Sheriff's Office.

Deputy Peery, may you rest easy. We will never forget your dedication to not only the citizens of Security-Widefield, but the rest of El Paso County. You have made the ultimate sacrifice and we will forever be grateful for you."

"Finding the right words to describe the tragedy that took place yesterday is impossible. As the chief of police and as a member of this community, my heart breaks for the two families who have lost loved ones and for the children who have lost a parent. From the community members who called for help, to the deputies, officers, and investigators who responded to the shooting, we are all left incredibly shaken. These tragedies are things I wish did not happen in our community; in the place all of us call home. When these types of horrific acts happen, there is nothing we can do to fully rebuild what was lost or to replace those who are no longer with us.

"To families grieving the loss of a loved one this morning, please accept my heartfelt condolences on behalf of the Colorado Springs Police Department.

"To our brothers and sisters at the El Paso County Sheriff's Office, know the women and men of CSPD stand beside you during this difficult time." 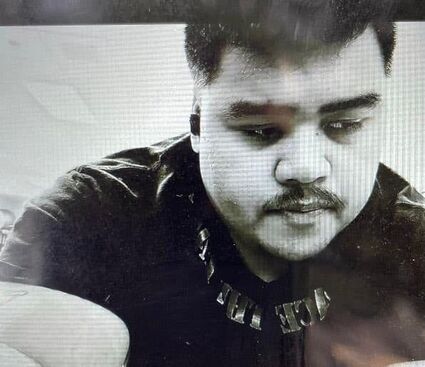 John Paz was sought in relation to the shooting in Security on Sunday evening. He was later confirmed dead from an apparent self-inflicted gunshot wound.

"I ask that you join me in prayer for Deputy Perry's family, our law enforcement officers, and their families," he said. "We will always stand with The Thin Blue Line."

Colorado Springs will take over the case, as is usual when there EPSO has an officer-involved shooting, with a high level of involvement from the District Attorney's Office.

Donations can be made to the family of fallen Deputy Andrew Peery through Chase Bank under the "Hugh Martin Fallen Officers Fund" with Andrew Peery on memo line. There are no other officially sanctioned accounts or fundraisers, EPSO said.