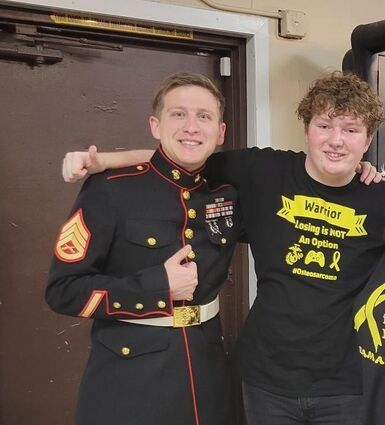 Aiden Cooper was supposed to start his sophomore year at Mesa Ridge High School this month. Instead, the 15-year-old just began a strict regimen of chemotherapy followed by multiple surgeries to treat the Stage 4 osteosarcoma - bone cancer - that was recently detected in his leg.

His mom, Tiffany, said there is a 98 percent chance he'll lose that leg.

"Aiden loves the military and was active in ROTC," she said. "All he ever wanted was to be a Marine. Now he is going to lose his leg and has to fight for his life."

Aiden won't be able to attend school this year due to his confinement in the hospital for the foreseeable future.

But in the few short weeks that his family has experienced the gut-wrenching anguish of this harsh diagnosis, they've also seen the community rally around them. The VFW Post 6461 is organizing benefits for him, and individuals are buying T-shirts and stickers with special logos to generate more funds. Last Sunday, members of the El Paso County Sheriff's Office conducted a drive-by parade down Aiden's street in Widefield, which he enjoyed immensely. 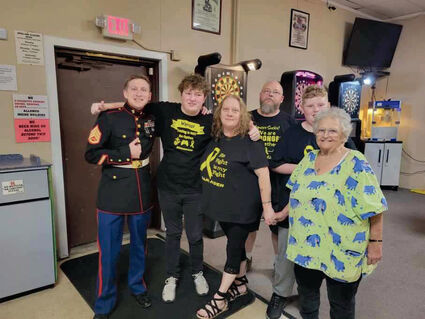 Those little acts of kindness are helping to lift the spirits of this teen who used to enjoy Mixed Martial Arts and video games, like many his age - along with giving his younger brother a hard time, Tiffany joked.

Neighbors near and far have congregated online using websites like Nextdoor and Facebook to offer help, from meals to monetary donations. Those interested in providing something, or just keeping up with Aiden's fight, are encouraged to join the Facebook group aptly named "Aidens Fight" at https://www.facebook.com/groups/748818106448052

Those wishing to provide meals specifically can find those details at https://www.mealtrain.com/trains/mmg7z7.

The fundraising website is at GoFundMe.com under "Aiden's Fearless Fight with Cancer" -- https://www.gofundme.com/f/aidens-fearless-fight-with-cancer?qid=59ff0ec79895255698436d8cccc17466