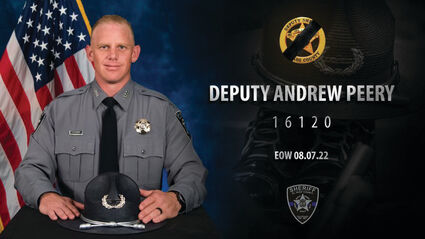 A female resident and an El Paso County Sheriff's deputy were killed in a shooting Sunday evening, Aug. 7, in Security, followed by the apparent suicide of the suspected gunman.

"It is with a heavy heart that we share Deputy Andrew Peery has been killed in the line of duty," an EPSO statement read. Peery was 39.

The name of the woman killed on Ponderosa Drive, a couple of blocks east of the intersection of Grand Boulevard and Security Boulevard, has not been released by officials. However, several neighbors and family members of the victim say it was Alex Paz (also known as Alexandra Mittig) the wife of suspect John Paz. The two reportedly were going through a divorce.

The El Paso County Coroner's Office said Tuesday it had not yet completed the autopsy and could not confirm cause of death. Those close to the scene said the woman was shot to death. Authorities said they found her in the front yard of the home on Ponderosa.

The first 911 calls of shots fired were made around 5:07 p.m. EPSO responded to the scene and instructed neighbors in the area of Grand Boulevard and Ponderosa Drive to remain indoors and shelter in place. The lockdown was in effect for several hours.

Two EPSO deputies and one Fountain Police officer were the first to arrive.

Colorado Springs Police Department, which has assumed responsbility for the investigation, said "deputies were able to return fire and, once additional personnel arrived, they immediately began lifesaving measures on Deputy Peery. Deputy Peery was transported via ambulance to an area hospital; however, he succumbed to his injuries."

The neighborhood remained contained by a large law enforcement presence for hours as law enforcement dealt with the harrowing situation, including a search for the suspect. For a few hours, residents were under the impression he had escaped from the crime scene on foot and was at large, armed and dangerous.

Shortly after 10:30 p.m., CSPD issued the following statement indicating the ordeal was over:

"We can now confirm the scene is secure and there is no longer a threat to the public. This is a very complex investigation and our detectives will be on scene for several hours. Please continue to avoid the area. We will release more information as appropriate."

A variety of activities took place up to that point in time, including a search for Paz and the acquisition of a search warrant.

"Detectives from the Colorado Springs Police Department’s (CSPD) Homicide/Assault Unit obtained a search warrant for this residence and the CSPD Tactical Enforcement Unit (TEU) subsequently entered the home," a CSPD statement read. "TEU found John Paz deceased inside, due to an apparent self-inflicted gunshot wound. While the El Paso County Coroner's Office will make the official cause and manner of death determinations for all three individuals, the deaths of Deputy Peery and the adult female are being investigated as homicides committed by John Paz."

The EPSO deputy identified as having fired their weapon has been placed on administrative leave per department policies. No Fountain Police Department or CSPD officers fired a weapon during this incident.

In the aftermath, friends and colleagues quickly gathered to mourn the loss of Deputy Peery, holding a procession in his honor in Colorado Springs.

"Andrew was a highly dedicated, highly decorated SWAT operator for the El Paso County Sheriff's Office, and he has been with my office since 2016," Elder said.

He is survived by his wife and two children.

Peery was a veteran of the U.S. Army and an officer with Bakersfield Police Department in California for over two years before joining EPSO.

Security Fire personnel also responded to this incident and transported Peery from the scene.

"We are deeply saddened and broken by this loss," a department statement read. "We mourn with our family at the El Paso County Sheriff's Office.

"Deputy Peery, may you rest easy. We will never forget your dedication to not only the citizens of Security-Widefield, but the rest of El Paso County. You have made the ultimate sacrifice and we will forever be grateful for you."

"Finding the right words to describe the tragedy that took place yesterday is impossible. As the chief of police and as a member of this community, my heart breaks for the two families who have lost loved ones and for the children who have lost a parent. From the community members who called for help, to the deputies, officers, and investigators who responded to the shooting, we are all left incredibly shaken. These tragedies are things I wish did not happen in our community; in the place all of us call home. When these types of horrific acts happen, there is nothing we can do to fully rebuild what was lost or to replace those who are no longer with us.

"To families grieving the loss of a loved one this morning, please accept my heartfelt condolences on behalf of the Colorado Springs Police Department.

"To our brothers and sisters at the El Paso County Sheriff's Office, know the women and men of CSPD stand beside you during this difficult time."

"I ask that you join me in prayer for Deputy Perry's family, our law enforcement officers, and their families," he said. "We will always stand with The Thin Blue Line."

Colorado Springs will take over the case, as is usual when there EPSO has an officer-involved shooting, with a high level of involvement from the District Attorney's Office.

Donations can be made to the family of fallen Deputy Andrew Peery through Chase Bank under the "Hugh A. Martin Memorial Scholarship Fund" with Andrew Peery on memo line. There are no other officially sanctioned accounts or fundraisers, EPSO said. 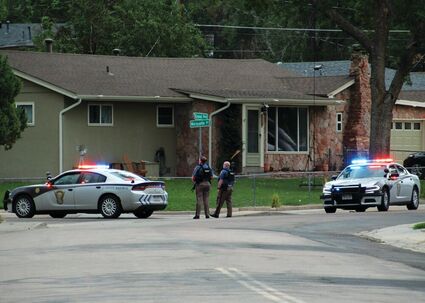 According to property records, John and Alex Paz bought the Ponderosa Drive house in March 2021.

Alex previously served in the U.S. Marines and was studying to be a veterinary technician, according to friends.

A fundraiser for her family is available here: https://www.gofundme.com/f/alex-mittig?utm_source=facebook&utm_medium=social&utm_campaign=p_cp%20share-sheet&fbclid=IwAR2g6enJNbUwDntIXj7jXWJDPGGJiXbL3Ubii071oVyHZJK9nBnhQCaPsAU

If you have any information regarding this case, contact the Colorado Springs Police Department at (719) 444-7000.