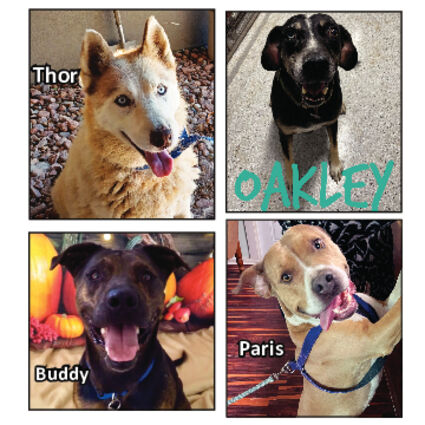 Thor, Paris, Oakley and Buddy are still with us, all needing and deserving homes. I did spend more time with Thor, our husky, brushing him. He is such a sweetie. A few times he whimpered (he still had mats), but never snapped at me. No! In fact, he licked my face a few times, and when he'd had enough brushing, he stood up and let me know. He knows his commands too: sit and lie down, for instance. I wish he were way smaller; I'd take him myself. He is 8 years old and about 65-70 pounds. (Check with Tumbleweed Country Kennels to make certain).

I'm in a bit of a writer's block, or as I like to say, writer's doghouse, trying to think what to write, so I'll tell you about my dog Halo. Though not from AARF, she is still a rescue, from the Humane Society. I desperately needed a companion for Willow, who hails from AARF, and needed a much smaller dog. Someone recommended I check the "Lost Pets" section on the website, and there I saw a pup who looked JUST LIKE my precious first dog Joshua. I found her on day 4 of her stray hold and the owners did not claim her by end day-5. We boarded Willow the next day and went up there, and things ... then...got crazy. I remember asking a question about something on the form: the man said, "that's your jurisdiction." I also noted they had an old address for me. I somehow did not connect the two, but they did, and denied me the dog (heretofore referred to as "my dog.") They told us we had too many pets (1 dog, 3 cats) and sent us packing. I knew they were wrong, because I had read the Fountain rules when I moved down here. But they wouldn't budge. The allowance for me was 6 pets, with no more than 4 dogs (actually I would now need to double-check this), and since I have some land, I could have a couple of horses (but I don't).

I was in tears and nearly hysterical and we miserably drove home. But not quite. My husband said, we're stopping at Fountain City Hall. To make a long agonizing story short, involving many emails and phone calls, he found out there that we were right. We called the Humane Society and they said "yes, come get her." But it was 4:20, i.e. beginning of rush hour. We had already picked up Willow, and because they would not hold (who would become) Halo until the next morning, but, rather, put her up for general adoption, we had to race back in all that traffic. To make a long drive short (sic), we got there at 4:45. And then....we waited 45 minutes. There was never an apology. No one would look me in the eye even. But we had our girl – the "silverest" lining ever! I really don't mean to dump on any society/rescue: they are so busy. They do fabulous work: they reunited some 4,500 dogs with owners in 2021! 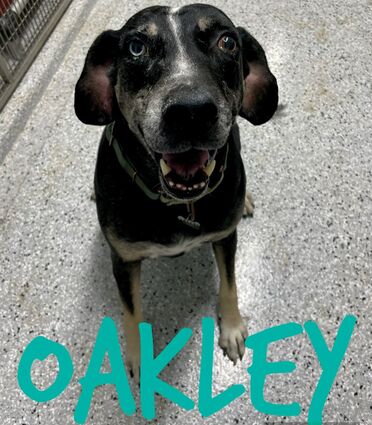 Some lessons and musings: Know where you live: your jurisdiction and its restrictions/allowances. 2) Thank heavens I live in a small town; the person we needed in Fountain was reachable immediately. 3)That day I had to forgive my husband his many faults, because he was a hero! In fact, I realized later that his name (Harold) is 4 parts Halo. The r and d are strays – so I call her Dr. Halo! 5) All the hysteria, tears, nail-biting, hair-pulling and general angsty meltdown stuff was COMPLETELY WORTH IT – BECAUSE SHE IS THE MOST WONDERUL DOG EVER (besides Willow, I am quick to add). So – know your stuff, make sure the car is gassed up, live in a small town, and don't give up – fight for what you want (and don't divorce your spouse til you get it)!

AARF holds adoption fairs at Petsmart on Powers Saturdays 11-2: 2965 N New Center Pt., Colorado Springs. HOWEVER, SOMETIMES THE FAIR IS ON A SUNDAY. PLEASE CHECK the website/Facebook for any updates (such as inclement weather, also). Sometimes the fair is right here in Fountain at Tumbleweed Country Kennels. More info, & call any time: JULIE at 719-375-1200 (land line) or Cathy at 719-761-5320. Email: [email protected] or [email protected] Facebook: AARF Colorado. Also try aarfcolorado.com. Tumbleweed Country Kennels is also on Facebook. YOU CAN NOW VIEW DOGS AT TUMBLEWEED ANY DAY OF THE WEEK – PLEASE CALL AHEAD: 719-382-1126.