Young residents plead for things to do in Fountain 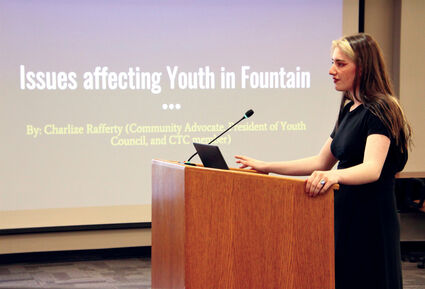 Charlize Rafferty, 16, shares her opinion on available activities for youth in Fountain - or lack thereof - during the Aug. 9 City Council meeting.

During a recent City Council meeting, a 16-year-old resident of Fountain told council members that the city "must do better" at providing opportunities for youth to be engaged to help curb participation in less desirable activities such as drug use.

Charlize Rafferty, an 11th-grader and a member of the Fountain Youth Council, said the lack of activities for young people directly relates to youth substance abuse.

"This council has the power to change that, to give youth drug-free places where they can feel safe and welcomed," Rafferty said.

She later explained to this newspaper that the items she most commonly hears requested by local youth are pools, safe community places, and general recreation.

This was not Rafferty's first time raising the issue with the council, but on this occasion she requested time to give a formal presentation on her and her peers' requests, as well as research on the matter. She shared numerous alarming statistics on teen drug use.

"The last time we spoke before this council, Mayor Thompson informed us about the free bus passes for youth in the summer," Rafferty said. "But to that I raise a question, if you will, madam mayor. Where are those buses supposed to take us? If a child/teenager cannot ride the bus themselves, does the city offer free bus passes to the adults who have to travel with them? Sure the buses can take us to the park but I can guarantee you, that every time I have been to the parks here in the last four years I have been approached by someone offering drugs, my 9-year-old sister has been approached. How many times have your children? And how many times will they say no? This is our normal, but it doesn't have to be."

Members of the council said they appreciated the input and affirmed that they were eager to see more for youth and people of all ages to do. However, those things take money. Mayor Sharon Thompson said some of the money in the budget that was highlighted in Rafferty's presentation was provided as part of the federal COVID relief funds, and that those monies are restricted to specific uses; recreation is not one of them.

She also explained that the city has come a long way with its recreational offerings in the last decade. Thompson said when she first joined the council nine years ago, the city only offered baseball. Now, it has numerous sports. It's not perfect, but it's improving, she said.

Mayor Pro Tem Tamara Estes encouraged youth to get involved in other activities available in the community, such as 4-H - something she participated in as a youngster.

"It's not just pigs and cows anymore; they have rocketry and everything else," she said.

Rafferty said the youth were not saying that they aren't thankful for the activities that are available, they just think that "more needs to be done."

"This City plans on welcoming thousands of new residents, which is hundreds of teenagers and youth," Rafferty said. "How does this council, and this city in general, expect to be able to support these youth as they turn into functioning members of society? How are you going to show them you care?"

Charlize's mother, Carola Rafferty, said it was "sad" that a teenager needed to explain to adults how badly needed activities are. She noted that many of the popular recreation options, such as skating rinks and bowling, are in Colorado Springs, and that not all kids and teens have the ability to get there.

Resident Fran Carrick said she agreed that there isn't enough to do in Fountain.

Rafferty's presentation suggested several things the city can do, including provide a safe space for youth; incentivize businesses to provide year long teen activities; attract businesses that provide teen activities; reach out to youth and see what they need to succeed through surveys; include low-income families, disabled people, and other marginalized groups and their opinions; and make sure resources for youth struggling with substance abuse are widely available.

At the end of the discussion, there seemed to be a consensus that the Youth Council may be able to have greater participation in various city boards and discussions to bring that perspective to the table.