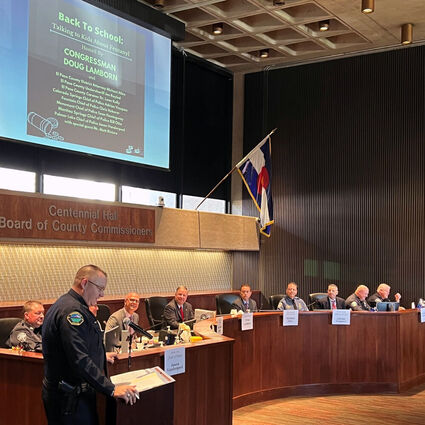 "Fentanyl is the most dangerous drug on our streets today, and it is leading young people to overdose at a higher rate than ever before."

That statement by District Attorney Michael Allen summed up the urgency of the fentanyl epidemic plaguing the youth of the nation, including here in El Paso County. Allen provided the remark during an Aug. 16 roundtable discussion involving officials from across El Paso County.

Fountain Police Chief Chris Heberer moderated the event, which was titled "Back to School – Talking to Kids about Fentanyl."

The event focused on the drug's effects on young people – often resulting in death – with a goal of educating the community on the fentanyl problem and raising possible solutions to combat it.

"Fentanyl is not a problem you can legislate away," Lamborn said. This pandemic requires an all hands on deck approach, and that's why I put this together, and that's why we're all here this morning ... because we all care about our young people."

DA Michael Allen said Southern Colorado is leading the charge against fentanyl, with many active public officials, school and church leaders, and parents and grandparents getting involved.

However, it's not possible to get fentanyl off the streets completely, although law enforcement is certainly making a dent in the supply. In Colorado, fentanyl seizures in just the first five months of 2022 had already surpassed all of 2021.

"The only way we're going to slow this down is through education," Allen said.

Keeping track of children's cell phones, social media accounts and knowing who their contacts are is a key tool in this battle, Allen said.

Coroner Dr. Leon Kelly addressed the addiction level of fentanyl, saying it's like nothing our society has seen before.

Heberer noted that no individual or family is immune to the dangers of fentanyl.

"The epidemic does not know any social or economic boundaries," Heberer said. "... It's already here in our classrooms."

Lamborn discussed the infiltration of fentanyl-laced drugs, which people sometimes believe to be some other narcotic when they inadvertently buy "counterfeit" drugs.

"Thousands of parents across the country have lost a child to counterfeit drugs that unknowingly contained fentanyl," he said. " ... All that a young person needs to get their hands on counterfeit fentanyl is a phone and a few dollars -- $3-5."

Members of the community are encouraged to watch the presentation to gain more insights into the situation and learn about the resources available. The video, just under 2 hours long, is available at https://vimeo.com/740497436/c1e382be1f

"Together we can save lives," Lamborn said.