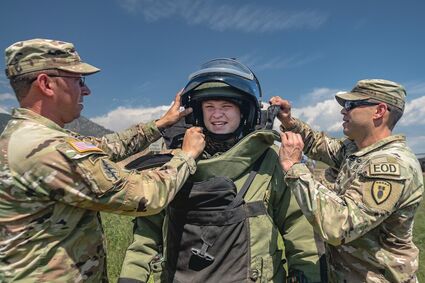 Explosive Ordnance Disposal Soldiers from the 62nd Ordnance Company (EOD) demonstrate their lifesaving and mission-enabling skills during a U.S. Army recruiting event on Fort Carson. The Army EOD technicians displayed their robots and bomb suits for busloads of students and community leaders.

The 62nd Ordnance Company (EOD) participated in the Meet Your Army event that was hosted by U.S. Army Maj. Gen. David M. Hodne, the commanding general of the 4th Infantry Division.

From 19 bases in 16 states, Soldiers and Army civilians from 20th CBRNE take on the world's most dangerous hazards in support of joint, interagency and allied operations.

During the event, the Army EOD technicians displayed their robots and bomb suits for busloads of students and community leaders.

Command Sgt. Maj. David Silva, the senior enlisted leader of the 71st EOD Group, said the event "gave potential recruits and pillars of the community a chance to see what we do." 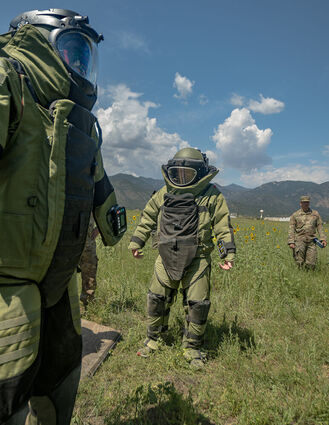 Silva said serving in the EOD community has given him the opportunity to defeat explosive hazards, travel the world and protect the nation's senior most leaders.

"I've seen all 50 states, five of seven continents, the absolute best and worst of dozens of countries, spent Christmas at the White House, protected the Pope as well as presidents and fast roped onto the USS Abraham Lincoln in the Persian Gulf," said Silva, a native of Long Beach, California, who has served in the Army for 29 years.

Silva encouraged prospective recruits who are interested in becoming an EOD tech to contact an Army recruiter.