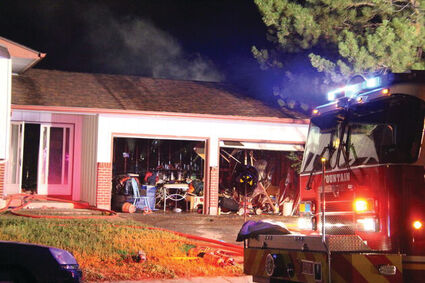 All residents made it out safely when a fire broke out in a home on Medicine Bow Avenue in Fountain on the evening of Aug. 23.

The fire started around 8 p.m.

"Fountain Fire along with the help of Hanover Fire, Security Fire, Fort Carson Fire, and Stratmoor Fire were able to get the fire out around 10:30 p.m.," FPD officials said in a statement late Tuesday night. "The fire started at the back of the home and quickly spread through the attic, making the home unlivable. The fire also spread to the home next to it causing damage. However, not to the extent where the residents will be displaced."

This fire is still under investigation. Thankfully there were no injuries reported, officials confirmed.

A resident at the scene told the Fountain Valley News a little boy may have started the fire accidentally while playing with something in the house. The boy's father said he had been busy working in another part of the house when it started.

A neighbor explained that the home's owner, Wilson Kennedy, had recently died and that the relatives had been busy sorting through and cleaning out belongings.

The boy's father said the fire also swept through a shed, which contained a propane tank that exploded. He added that there were no pets in the home. He said his family immediately tried to get the attention of neighbors to get them out of their adjacent homes, and that they attempted to use a hose to wet things down.