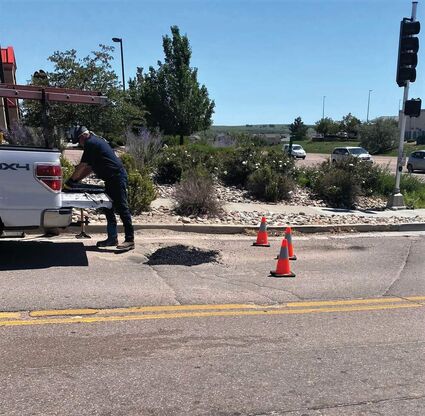 This photo from a resident shows a man filling a pothole in the driveway between Arby's and McDonald's on Aug. 24. Property managers say they don't know who it is.

Residents who frequent the shopping center with McDonald's and Arby's on Mesa Ridge Parkway were pleasantly surprised last week when someone filled a large pothole in the driveway. Many hoped this was just the start of a series of repairs around the Markets at Mesa Ridge.

Others criticized the fix, calling it a temporary band-aid done with inadequate materials.

But much to the surprise of many, including city officials who had been after the property management company to make repairs, the company didn't actually do or sanction that work.

"The photo is from an unidentified person that was not approved by the Board to complete work," said Ben Sloman, a representative of Associa Colorado, the property management firm.

The identity of the "good Samaritan" - or "pothole vigilante" as one local social media user called him - remains unknown, although it's rumored that he may be a maintenance worker for one of the businesses in that center. Nearly a week later, this same person and a second individual were seen filling another hole near McDonald's.

Still, good news is on the horizon for other problem areas around these businesses.

"There is a vendor scheduled to start work in September for the roads within Markets at Mesa 1," Sloman said.

The No. 1 refers to the shopping center on the north side of Mesa Ridge Parkway. Although the firm is also responsible for Mesa 3, the center south of the parkway ­- sometimes referred to as the Safeway shopping center - repairs in that area are not planned at this time. He did not rule it out, though.

"Both Markets at Mesa 1 and Markets at Mesa 3 Boards have not asked for, planned or budgeted for this work to be done," Sloman explained. "This work [at Mesa 3] is being done based on feedback from unit owners and me providing this feedback and obtaining bids/proposals to the Boards for consideration. It is their ultimate decision if they would like to proceed or not.

"We are aware that there are issues with the roads with bumpy areas and uneven areas," Sloman continued. "All this work costs the association money, and since this work is not budgeted or planned it takes a little more time to gain approvals and work through."

Both centers have been the subject of complaints by drivers, whose frustrations over the many potholes and bumps near some of their favorite stores and restaurants have been growing.

"Those parking lots are deplorable!" said Holly McCollum. "Shame on them for allowing them to get as bad as they are. ... We've been here three years, and it's been the same all three years and getting worse. There is zero maintenance and care for the parking lot."

Deputy City Manager Todd Evans and Code Enforcement Supervisor Tish Cornella confirmed to the Fountain Valley News on Friday, Aug. 26, that the city had mailed a citation to Associa earlier last week. In fact, Evans and Cornella had just discussed their decision to take legal action a few days prior, so they assumed the repair made Aug. 24 in the main driveway near Arby's was a result of their phone call to the company giving them a heads-up about the citation.

Both said they were surprised to learn the identify of the man making the repairs seems to be a mystery.

The person who took the photo, who requested to remain anonymous, said the person in the photo at least attempted to do the community a service, "which is leaps and bounds above what the 'property management' has done in the past few months."

Evans noted that this patch was done using "cold mix," which is not a long-term solution. City officials will proceed with the citation because they are "not satisfied" with the work done so far, regardless of who did it, and the fact that the overall conditions in this center are significantly bad. The citation will require property representatives to come to court, Evans said.

Complaints have been getting serious for several months. But residents and city officials alike had trouble directing them to the proper authority, as the centers have many different property owners involved and people had a hard time figuring out who the correct contact person was.

"The city has received numerous calls and complaints of the potholes in the two shopping areas located on the north and south side of Highway 16 (Mesa Ridge Parkway)," Spengler wrote to Sloman. "One of the potholes on the north side is in the entire drive lane in the entrance to the north shopping center, and every car hits it. Some have called saying things have been damaged on their vehicles due to this.

"Since this is all private area, the city can only do our best by reaching out to whomever may be in charge. You are the fourth person I have reached out trying to find a good contact that may be able to address this for us. If you could please respond to this email with an action plan for resolving this issue or forward me a valid contact that can address this for our residents, I would appreciate it."

Evans followed up with his own email to Sloman, explaining that the city had been getting calls about this center weekly. He noted the city had previously contacted them with concerns about their landscaping along the main roadways of Mesa Ridge Parkway and, particularly, Fountain Mesa Road. 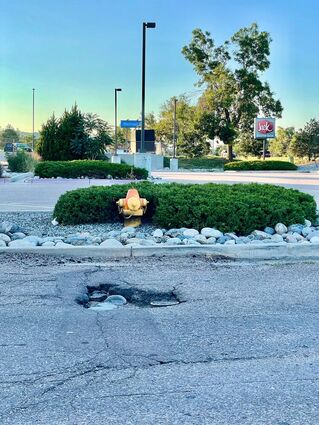 This pothole between Jack in the Box and Panda Express on Hwy. 85-87 is another one in a shopping center often criticized for its pavement condition.

"Please fix the parking lot situation – it would be rated an  F  in a pavement analysis both in condition and safety," Evans wrote. "The conditions are so bad that people swerve all over the lot to avoid the potholes causing dangerous conditions for your patrons."

About a month before the city made contact, a resident named Camille Powell had made it her own mission to identify the property managers and follow up on pothole complaints on a regular basis. She wrote to them numerous times requesting updates on the matter. She even volunteered to drum up some asphalt companies, asking them to bid on the project, when Sloman said few bids had been submitted. So, that's what she did.

"I am one that got car damage," she said. "I hit an unavoidably deep one and my check engine light came on. I had to take it in to a mechanic and it caused a crazy alignment issue. It was a few hundred with diagnostic and correction."

Now that there seems to be some resolution scheduled, she is considering targeting other problem areas around the Fountain Valley.