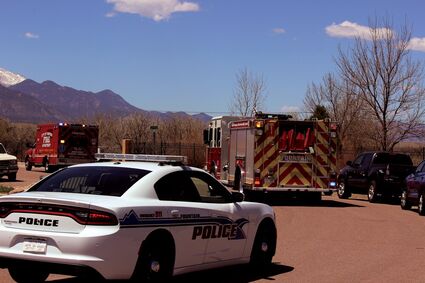 Both police and fire departments would increase their staffing levels if a proposed 6.1-mill increase is approved by voters in the November election.

The Fountain City Council held its final vote on a proposed ballot initiative that would increase property taxes to fund additional police, fire and EMS resources. Fountain residents will be asked to vote on the measure in the November General Election.

The council approved the following language, which is how it will appear on the ballot:

SHALL CITY OF FOUNTAIN TAXES BE INCREASED BY AN ESTIMATED $1.7 MILLION ANNUALLY BY INCREASING THE CITY'S EXISTING PROPERTY TAX BY 6.1 MILLS TO BE USED EXCLUSIVELY FOR PUBLIC SAFETY BY HIRING SIX (6) ADDITIONAL FIREFIGHTER/EMT PERSONNEL AND SIX (6) ADDITIONAL POLICE OFFICERS, TO:

AND TO BE USED TO ENHANCE ALL EXISTING FIRST RESPONDER SAFETY, TO IMPROVE RECRUITMENT, RETENTION AND TRAINING, AND TO SUPPORT MENTAL HEALTH AND WELLNESS;

AND SHALL THE REVENUE RAISED BY SUCH MILL LEVY INCREASE TO BE COLLECTED AND SPENT BY THE CITY CONSTITUTE A VOTER-APPROVED REVENUE CHANGE AND AN EXCEPTION TO AND IN ACCORDANCE WITH THE REVENUE AND SPENDING LIMITS OF ARTICLE X, SECTION 20 OF THE COLORADO CONSTITUTION OR ANY OTHER LAW?

Officials say the city's public safety resources are being stretched due to population growth and rising crime rates. Although fire department staffing levels are at a "minimum" currently, and police officers are stretched thin, they are trying to get ahead of additional growth and demands in the future by generating these funds to hire more personnel before those effects take their toll.

The most recent mill increase was in 1990.

The city estimates this increase in the millage rate of 6.1 mills will generate $1.7 million annually. A 6.1-mill increase would cost a homeowner about $178 annually, or $15 per month, for a home with an assessed value of $410,000.

Fountain Valley News will continue coverage of this issue with a full breakdown of the numbers, how residents can determine exactly how much more they would pay, and the proposed uses of these funds by the police and fire departments over the next several weeks.